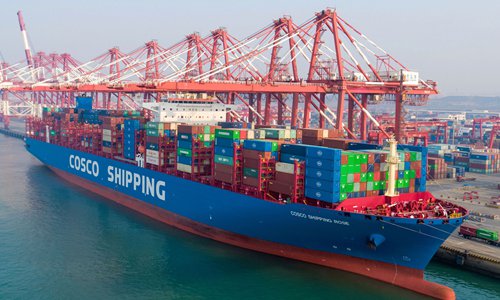 A ship of Cosco Shipping being docked at a port in Qingdao, East China's Shandong Province in January. (Photo: VCG)

China's centrally administrated State-owned enterprises (SOEs) posted their best profitability performance in 2018, even as the country's GDP growth has slowed, as initial reforms yielded results and provided solid support to the world's second-largest economy.In 2018, aggregate revenues of the country's nearly 100 centrally administered SOEs increased 10.1 percent year-on-year to 29.1 trillion yuan ($4.29 trillion), the State-owned Assets Supervision and Administration Commission (SASAC) said on Thursday. Profit growth was even better, reaching 1.7 trillion yuan with an increase of 16.7 percent, the best results since these figures were first collected, according to SASAC spokesperson Peng Huagang.The figures were achieved as the economy's growth retreated during the third quarter of 2018, with a gain of 6.5 percent. That was the slowest expansion since the global financial crisis.Peng said the reasons for the SOEs' strong profits included the continued stable growth of China's economy, the benign external environment as a result of macroeconomic adjustment policies, efforts to boost efficiency and stay lean, and intensified Party construction work that brought a breeze of righteousness and cohesion to companies."Such a performance is hard-won. It shows the great strength and contribution of SOEs to China's economy," Li Jin, chief researcher of the China Business Research Center, told the Global Times on Thursday. He noted the achievements were due to SOEs' supply-side reforms, especially their innovative development of technologies, as well as their continuous gains in efficiency.Experts said the solid performance by central SOEs underpins the economy, which now faces intensifying downward pressure."SOEs are like 'the pillars of a house' and 'heavy stones on a boat' to China's economy," Li noted. "Even if we have storms in the sea, the weight of the 'stones' could help us stay stable."The SASAC said it will guarantee to meet its 2019 target by strengthening risk control and self-dependent innovation, and continuing SOE reform. "It is obvious that external and internal uncertainties will increase in 2019. Central SOEs as the main body in the market will be affected by the macroeconomy. Hence, it is necessary for SOEs to deepen market reforms to preserve or increase the value of State capital next year," said Wang Jiang, director of the Beijing-based Central SOE Think-tank Alliance.BRI roleAnswering concerns on SOE-led investment in the Belt and Road initiative (BRI), Peng said in the construction of the BRI, central SOEs have played an important role."In the BRI, a substantial amount of infrastructure investment is done by Chinese central SOEs. During the process, they become more seasoned in their ability to operate an international business. They have learned to better follow laws and regulations in local markets and undertake social responsibility," Peng said. "They have won the praise and support of local governments and their people."Li said that a few SOEs accepted subsidies from the government, but it is also notable that most SOEs are heading toward the status of a fully functional participant in a market economy. Chinese officials including central bank governor Yi Gang and Peng have urged since last year that respective parties take a neutral stance when it comes to a company's ownership structure and adopt a "competitive neutrality" stance.However, some Western countries have doubts about SOEs in China. Daniel Araya, US technology consultant and government advisor, wrote on Forbes on Monday that the Made in China 2025 initiative seeks to help the country become a high-tech global superpower through acquisitions and investments in Chinese SOEs."This is their misunderstanding of China's economic policy because there is no discrimination involving policy-type subsidies between SOEs and private enterprises. For example, there is no difference in the level of subsidies for photovoltaic electricity among SOEs, private enterprises and foreign enterprises in China," said Wang. It is a mistake for some people to consider the budget return of State capital as "government subsidies." "Competitive neutrality is the basic principle of the market economy. Chinese SOEs and other types of enterprises should not be discriminated against because they are equal before the law," he added.