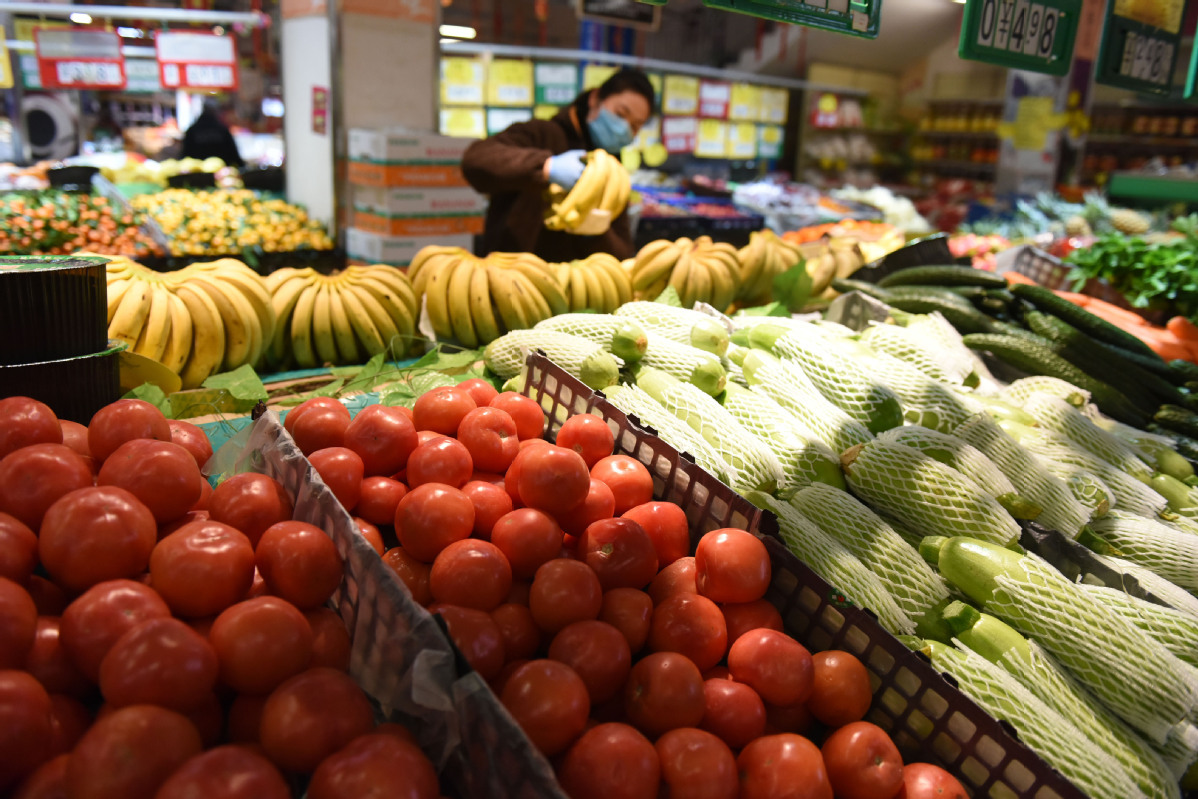 China's consumer inflation eased to a 14-month low in May as food prices stabilized while business resumption deepened, the National Bureau of Statistics said on Wednesday.

Slowing inflation points to subdued domestic demand as well as larger room for macro policy to reinvigorate the economy, affected by the COVID-19 pandemic, analysts said.

The growth in the consumer price index, a main gauge of inflation, slowed for the fourth consecutive month to 2.4 percent year-on-year last month, versus 3.3 percent for the previous month, the bureau reported.

Food prices grew by 10.6 percent year-on-year in May, down 4.2 percentage points from April.

Growth of pork prices, the biggest contributor to CPI growth, further slowed to 81.7 percent from 96.9 percent in April, the NBS said.

The core CPI, which excludes food and energy prices, went up 1.1 percent year-on-year last month, unchanged from a month earlier.

Consumer inflation may further abate, given that continuous resumption in pork supplies and a high comparison base should keep the rise in food prices contained. Nonfood inflation may remain subdued as the recovery in demand is set to be mild, analysts said.

Wang Tao, chief China economist at Swiss bank UBS, said CPI growth may drop considerably in the second half of the year and CPI growth for the year may land at around 2.4 percent, well below the government control target of 3.5 percent.

"A low inflation level has provided room for monetary policy to boost the real economy, especially in terms of helping small and medium-sized enterprises get through difficulties," said Liu Xuezhi, a senior researcher at the Financial Research Center of Bank of Communications.

Profitability of industrial firms is under mounting pressure, as weak market demand due to COVID-19 and the earlier plunge in the international prices of bulk commodities like oil have weighed on the prices of industrial goods, Liu said.

The producer price index, which gauges factory-gate prices, declined 3.7 percent year-on-year last month, widening from April's 3.1 percent drop and marking the fourth month in a row for the index to fall into negative territory.

China is ramping up efforts to put into place its macro policy package to support hard-hit businesses and individuals and boost domestic demand.

New social financing－capital received by the real economy from the financial sector－came in at 3.19 trillion yuan ($451 billion) last month, substantially higher than the same period last year, the People's Bank of China said on Wednesday.

On Tuesday, an executive meeting of the State Council, China's Cabinet, made arrangements for a special transfer payment mechanism to ensure that fiscal funds directly benefit businesses and people.

As supportive policies filter through to underpin domestic demand while the rally in international oil prices continues, the PPI is expected to recover in coming months, a CITIC Securities report said.

Li Xiang contributed to this story.