BEIJING, July 10 (Xinhua) -- China's consumer prices continued stable growth while inflation at the factory gate weakened. Analysts believed that inflationary pressure may not be a constraint on monetary policy. 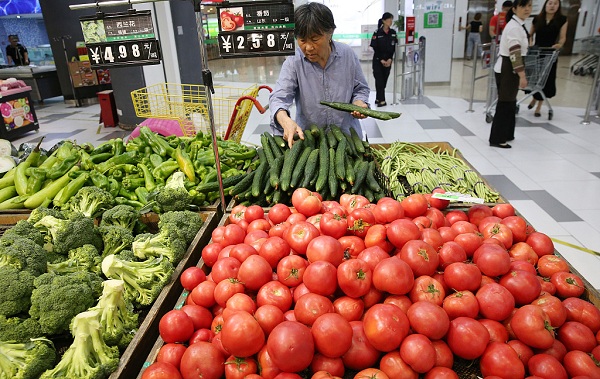 The consumer price index (CPI), a main gauge of inflation, rose 2.7 percent year on year in June, the same expansion as that of May, the National Bureau of Statistics (NBS) said Wednesday.

The reading, in line with market expectations, edged down 0.1 percent last month on a monthly basis.

For the first half of this year, CPI increased 2.2 percent compared with the same period last year, according to the NBS.

Food prices grew 8.3 percent year on year last month, up from 7.7 percent in May. However, the prices dropped 0.3 percent on a monthly basis.

In June, prices of fruits hit a record high by climbing 42.7 percent from a lower base last year.

On a monthly basis, the prices were up 5.1 percent, contributing 0.11 percentage points to monthly CPI growth. 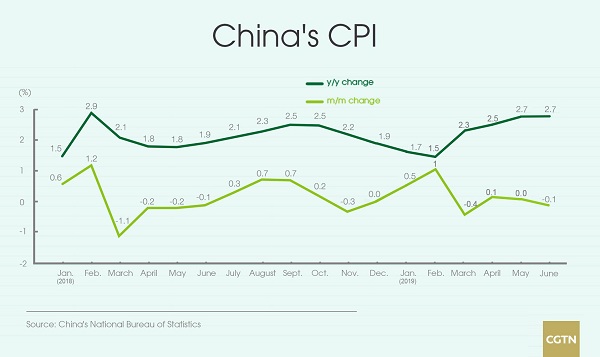 The price of pork expanded 3.6 percent month on month due to tight supply.

"We expect the surge in fruit prices to be short-lived and could subside in coming months when the supply increases," said a research note from Nomura.

Pork prices, on the other hand, could rise further due to a sharp decline in hog stock from the spread of African swine fever, but wouldn't exert much pressure on the central bank's easing stance, Nomura said.

China International Capital Corporation Limited (CICC) projected that rising food prices might not push headline CPI to stay above the government's 2019 target of 3 percent for an extended period of time.

"Looking forward, the low base that's been driving up CPI shall pass by August, which may lessen the upside risk of CPI," CICC said in a report. 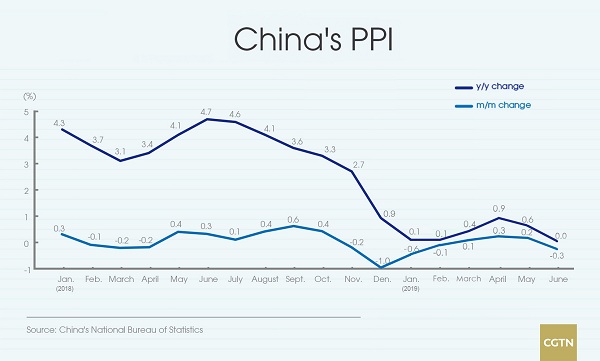 Wednesday's data also showed that China's producer price index, which measures costs for goods at the factory gate, rose 0.3 percent year on year in the first half of 2019.

In June, the index was flat with the same period last year, according to the NBS.

On a monthly basis, producer prices went down 0.3 percent in June, compared with the 0.2-percent growth in May.

"The PPI may turn negative as the base rises in the third quarter," CICC said.

However, the recent tightening over environment protection protocol in northern China may help support certain upstream domestic prices in the near term, it added.