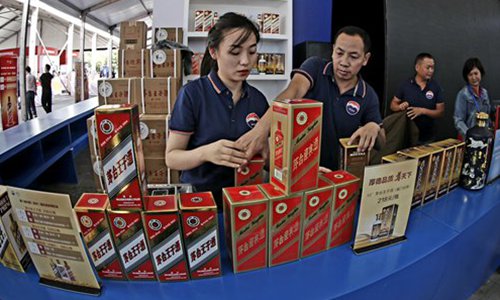 The market capitalization of Kweichow Moutai, a distiller based in Southwest China's Guizhou Province, outweighed that of Industrial and Commercial Bank of China (ICBC), the world's largest bank by revenue, at the market's closing on Thursday, domestic news site thepaper.cn reported, citing WIND data.

Kweichow Moutai's market capitalization was 1.55 trillion yuan ($220.13 billion) while ICBC was valued at 1.54 trillion yuan. However, ICBC, China Construction Bank and Ping An Insurance still lead the liquor maker if their locked-up shares are counted. Chinese banks are favored by investors due to their strong profitability.

Shares of Kweichow Moutai have soared in recent weeks, reaching a high of 1,241.61 yuan per share on Tuesday.

Analysts said the change in the ranking could signify rising market expectations for consumer stocks, rather than those from other industries, as the Chinese economy shifts its growth engine toward consumption.

Some investors also noted that food and beverage shares tend to have more promising performances when China's economy enters a down cycle.

In the third quarter, domestic consumption contributed about 60.5 percent to GDP growth in China.