BUSINESS China's CPI keeps flat in May, but PPI surges 9%

China's CPI keeps flat in May, but PPI surges 9% 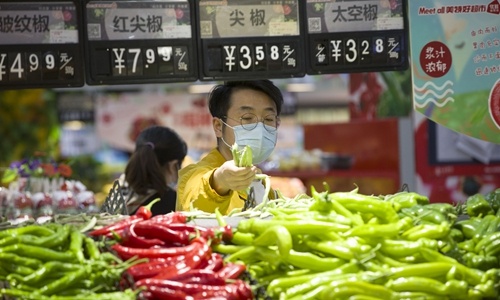 The consumer price index (CPI) in China rose 1.3 percent year-on-year in May, while factory gate prices or PPI surged 9 percent, the fastest annual pace in over 12 years, according to official data released on Wednesday. Bets on a global economic recovery and easing US monetary policy have pushed up international bulk commodity prices, experts said.

China's CPI edged down 0.2 percentage points from April, according to figures unveiled by the National Bureau of Statistics (NBS) on Wednesday.

Food prices fell 1.7 percent from the previous month, contributing about 0.31 percentage points to the monthly decline in the CPI, said Dong Lijuan, a senior statistician with the NBS.

Along with a rapid recovery of live hog output and sufficient market supply, the price of pork fell 11.0 percent month-on-month and 23.8 percent year-on-year.

Non-food prices rose 1.6 percent year-on-year, according to the NBS.

Although China's overall CPI was stable due to the decline in pork prices, bets on a global economic recovery pushed factory gate prices up significantly.

Rising manufacturing material costs of crude oil, iron ore, non-ferrous metals and other bulk commodities, together with the rise in domestic demand pushed by China's work recovery, made a considerable contribution to the PPI surge in April, according to the NBS.

On the one hand, the loose monetary policy represented by the US has led to excess liquidity, which pushed up bulk commodity prices. On the other, expectations of a US economic recovery and global work resumption peaked reached a peak in May, Dong Dengxin, director of the Finance and Securities Institute of Wuhan University, told the Global Times on Wednesday.

On a monthly basis, the PPI reading was up 1.6 percent in May. The cost of ferrous metal smelting rose 6.4 percent in May, while the rising global prices of copper, aluminum and other non-ferrous metals helped the domestic non-ferrous industry rise 4.4 percent. The risk of inflation persists, as large economies worldwide are pursuing policies that will weaken their currencies, Tian Yun, former vice director of the Beijing Economic Operation Association, told the Global Times on Wednesday.

He also noted that some downstream industries may have to bear more cost burdens related to industrial materials, which will hinder exports.

In addressing the stability in the annual inflation rate, the National Development and Reform Commission held a conference on Wednesday aimed at underscoring the necessity of tracking bulk commodity prices and improving early warning and predictive capabilities.

Experts said that the PPI surge in May might not last.

"The pandemic deteriorated very quickly in countries like India in May, adding uncertainly to the outlook for global work resumption.

"But central banks worldwide may shift to a tightened monetary policy to deter inflation," Dong added.