BUSINESS China's CPI rises by 2.5% in August; growth slows down, in sharp contrast to inflationary pressure faced by US

China's CPI rises by 2.5% in August; growth slows down, in sharp contrast to inflationary pressure faced by US 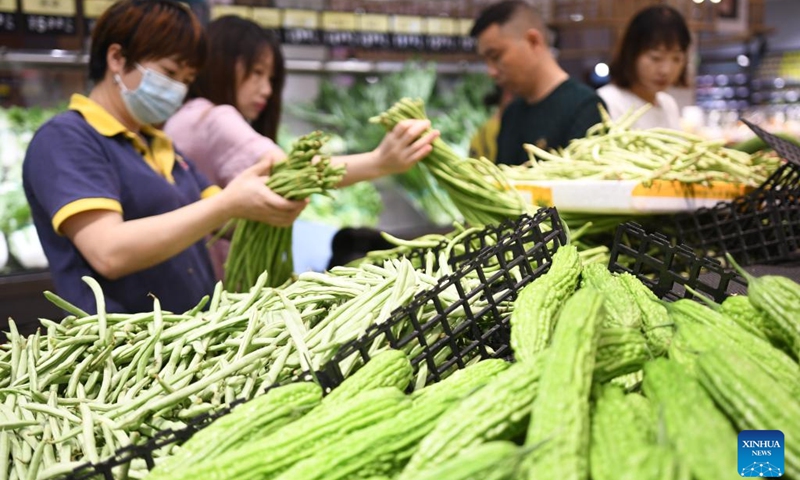 China's CPI growth slowed down in August amid a combination of factors such as the decline in crude oil prices, data from the National Bureau of Statistics (NBS) showed on Friday.

Experts said that while China does face certain upward inflationary pressure in the second half of this year, there are still favorable conditions for prices to remain generally stable. And the relatively stable CPI, which is in stark contrast to the high inflation in major economies around the world, has enabled China to maintain a different monetary policy stance even as other major central banks, including the Federal Reserve, continue to raise interest rates.

China's consumer price index (CPI), a main gauge of inflation, rose 2.5 percent year-on-year in August, slowing from a 2.7 percent rise from the previous month and lower than general market expectation, according to the NBS data. On a month-on-month basis, the CPI fell 0.1 percent.

However, the core CPI, which excludes food and energy prices, gained only 0.8 percent in August, unchanged from the July level, indicating a general stability in prices for consumer goods and services.

Judging from the current inflation data, the domestic market supply is relatively adequate and the imported inflationary pressure is expected to weaken, meaning that China will be able to attain its annual CPI growth target of 3 percent, which will provide ample room for flexible macroeconomic policy adjustment, experts noted.

"Previous market forecast for August CPI was around 2.8 percent due to concerns over the impact of factors such as epidemic situation and extreme weather of heat wave on market supply. But the actual figure turned out to be lower than expected, in part reflecting the effectiveness of government measures aimed at ensuring the supply of important livelihood-related products," Xi Junyang, a professor at Shanghai University of Finance and Economics, told the Global Times. "On the other hand, it is also because external pressures are abating."

Concerns about the global economic slowdown and expectations of falling fuel demand led to sharp oil price falls, with the Brent crude down more than 11 percent in August alone.

"Due to the seasonal increases in pork prices and others as well as the low base effect of the same period last year, domestic food prices may remain at a relatively high level in the coming months, but non-food prices, especially the core CPI, will maintain at a low level, so there is little chance that CPI will exceed the 3 percent target in the fourth quarter," a chief economist at a securities company, who requested anonymity, told the Global Times.

However, it should be noted that the mild rise in CPI also points to a structural problem in demand. Except for food, energy and other daily necessities, consumer demand is relatively weak, which remains the main challenge facing the macroeconomy, the economist noted, adding that more stimulus and supportive policies are needed.

"In my view, there is still room for monetary policy adjustment. There were concerns that a high producer price index (PPI) growth would prop up CPI later on, but now such concerns have eased," he said.

China's PPI, a main gauge of factory prices, decelerated to grow 2.3 percent year-on-year in August, a considerable drop from 4.2 percent in July and market forecast of a 3.2 percent growth, according to the NBS. On a month-on-month basis, the PPI fell 0.1 percent.

A further fall in PPI growth means the declining cost of production for manufacturers, which will be conducive to reducing long-term inflationary pressure. China's PPI once surged to a record high of 13.5 percent in October 2021, spurring concerns over high inflation in consumer goods.

China's stable inflation, which is in sharp contrast to the high inflation in the US and Europe, is mainly because China has been adhering to a prudent monetary policy based on its own economic conditions, professor Xi pointed out.

The US adopted ultra-loose monetary policies in the wake of the COVID-19 pandemic, and as a result, its domestic inflation rates have stayed above 8 percent in recent months. US' CPI stood at 8.5 percent in July, slightly down from its 40-year peak of 9.1 percent in the previous month.

US Federal Reserve Chair Jerome Powell said on Thursday he is "strongly committed" to fighting inflation "until the job is done." His remarks strengthened market expectation that the Fed will enact a third consecutive 0.75 percentage point increase this month.

"It is the super-aggressive rate increased by the Fed that actually highlights the 'stubbornness' of the US inflation," Anbound Consulting said in a research report sent to the Global Times on Friday.

"While the widening policy difference between China and the West will put increasing pressure on the Renminbi and the Chinese economy, it is more important than ever for China to stick to its own economic policy decisions," professor Xi noted.