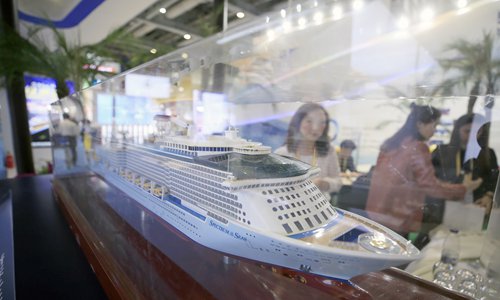 A view of Royal Caribbean's cruise model during the 2nd CIIE. (Photo: GT)

As China's cruise economy enters a high-quality development era, the potential of China's tourism service trade will be further released, benefiting even more companies at home and abroad as well as the Chinese public, industry players said on Sunday.

For instance, leading global cruise company Royal Caribbean showcased the model of its new cruise ship "Wonder of the Seas" during the expo, which is currently being built at a French shipyard.

Meanwhile, China's major state-owned enterprises such as CSSC, China Merchants Group, COSCO Shipping Group, and China Travel Service Group have invested in cruise construction and operation, which is expected to bring its cruise economy to a period of development across the whole industrial chain, Zhu said.

Five Baoshan-based cruise services companies signed agreements during the forum with five foreign CIIE exhibitors, which are worth more than 1.2 billion yuan ($170 million).

Specifically, Shanghai Mengfei Import & Export Co signed an agreement with an Italian exhibitor for the purchase of cruise-related daily necessities.

"We were not in the cruise business before, but now the government has chosen us as an alternative supplier for the future cruise ships," Wang Xuerong, general manager of Shanghai Mengfei Import & Export Co, told the Global Times on Sunday.

"The industrial chain for the cruise industry is very long, and we are looking forward to participating in it," Wang noted.