BUSINESS China's debt paydown is working, if you know where to look

China's debt paydown is working, if you know where to look 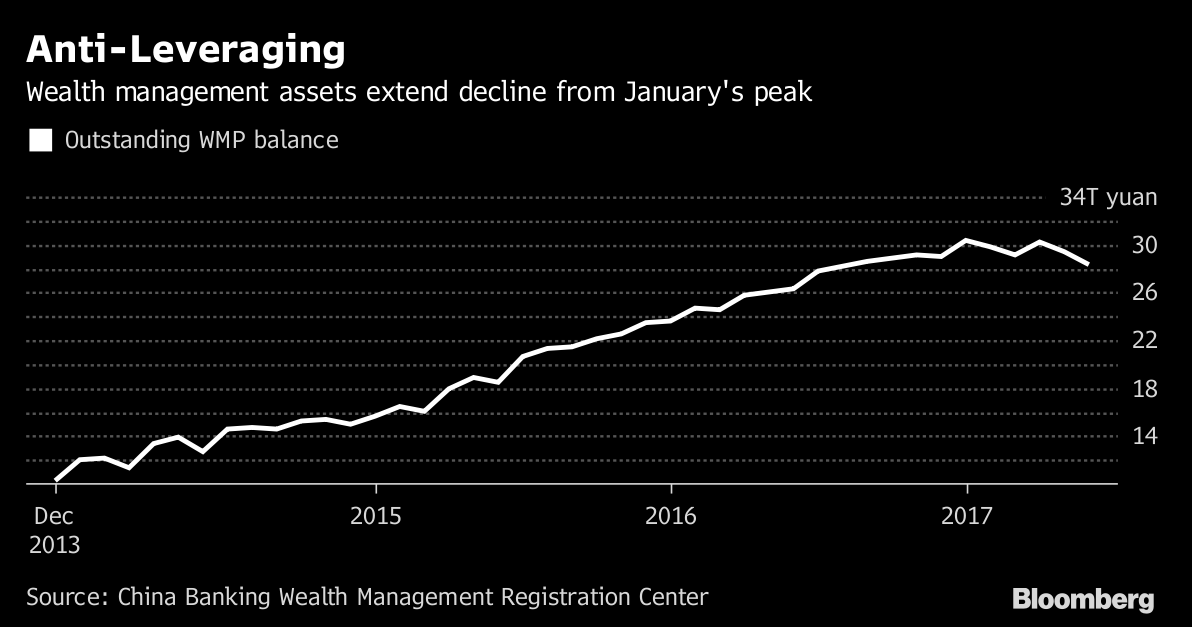 China’s deleveraging campaign has yet to satisfy the country’s central bank chief, but evidence shows that there are significant areas of progress.

In the wake of People’s Bank of China Governor Zhou Xiaochuan’s call last week for "further efforts" to reduce financial risks, and with President Xi Jinping tightening his grip on China’s power structure, the campaign is tipped to broaden in the coming year.

“It has managed to take out a lot of leverage out of the system and make the system safer by keeping overnight rates up and policy rates flat,” said Sean Taylor, chief investment officer for Asia Pacific at Deutsche Asset Management in Hong Kong. Financial market deleveraging “will be a real focus next year” after Xi consolidates his position, he said.

Among the areas of success:

Upcoming bank earnings will offer China watchers the latest look at credit growth and leverage in the industry. China Construction Bank Corp. reports third-quarter profit on Thursday, the first of the country’s big five banks to do so.

Here are four charts illustrating the progress the nation has made on cutting financial-market risks:

Total assets parked in wealth-management products dropped during the first half of the year as regulators took strong measures against financial arbitrage and pushed banks to focus on WMPs catering to households, rather than to each other, according to a report this month from China International Capital Corp.

Bank lending to non-banks such as investment funds and securities brokers -- an important source of shadow credit expansion -- has decelerated significantly, according to UBS Group AG estimates. That means less leverage being generated from multiple layers of lending between financial institutions, says Donna Kwok, a senior China economist at UBS in Hong Kong. “We are not done yet -- they will continue to install more checks and balances as the markets continue to evolve,” she says of the regulators.

A category of shadow credit that’s not officially recorded, which includes non-banks’ asset-management products, trust assets and insurance products, started to shrink in the second quarter of 2017, according to UBS estimates. That’s after 1.3 trillion yuan of such credit was created over the same period in 2016. The bank expects the measure to slow more than China’s broad measure of new credit, reducing financial risks.

Regulators’ efforts are also showing up in the rise of borrowing costs. Yields on China’s local five-year sovereign notes have climbed about 88 basis points this year, to 3.73 percent, to near the highest since 2014. The gains have lifted funding costs for the nation’s companies, with the net sales of corporate bonds plunging 94 percent in the first nine months of this year from the same period in 2016.

One area that’s not seeing a decline is sales of negotiable certificates of deposit -- a key funding source for smaller and medium-sized banks. But that’s in part a symptom of success in compressing leverage in other areas. Because the smaller lenders are less able to tap funding other sources, they’ve turned increasingly to these instruments. Ultimately, regulators may tamp down that category as well.