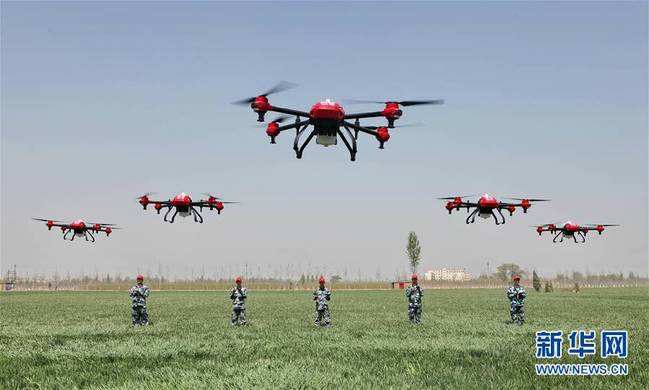 In recent years, drones have become commonplace in daily life, being applied in various fields such as taking aerial pictures, splashing fertilizers and delivering goods.

By June 2019, the number of drones registered in China reached 339,000. Statistics indicated that China had exported 1.2 million drones for consumption, accounting for 70 percent of the global export.

Insiders pointed out that the success of Chinese drone maker DJI has also boosted the industry. Besides taking aerial photos and videos, DJI drones are also applicable in multiple fields such as forest patrol, maintenance of power transmission lines, traffic control and emergency rescue.

The success of DJI has reshaped the world’s understanding of drones, making the machines accessible and desirable, said Liu Yang, CEO of Shine Tech, a technology company based in southwest China’s Chengdu, who believes that the success of DJI has injected confidence into the industry.

China plans to bring the value of the drone market up to 60 billion yuan by 2020 based on an annual growth rate of 40 percent. The market value is expected to hit 180 billion yuan by 2025, according to a guideline released by China’s Ministry of Industry and Information Technology in 2017.

Technology is behind the industry’s quick development. In recent years, improved integrated circuit technologies and information technology have made smaller, lightweight drones a possibility, meaning the technology can be applied to a growing number of situations.

Chinese authorities have issued relevant documents to regulate the sector to increase safety, in areas such as drone registration, airworthiness, airspace management, and issuance of flying certificates.

The country has also supported the sector by improving human resources. By the end of 2018, a total of 4,049 drone manufacturers had been granted business permits, and 43,000 drone flying certificates had been issued. China will require about 1 million drone pilots in the next five years.

With the development of 5G technology, a ground-air network could be established so that clearer pictures and videos could be captured based on faster data transmission, according to industry insiders.