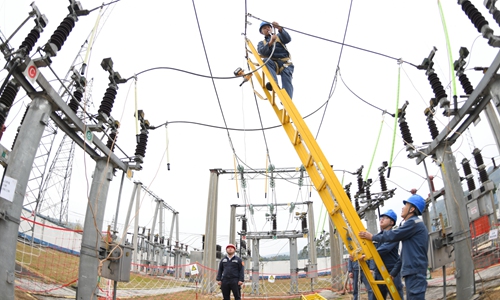 Analysts said the rise of generated and consumed energy reflected the strong resilience of China's manufacturing sector and dynamism of the Chinese economy.

"The economic and social order has been restored in an orderly manner, and the national economy is returning to a normal development level," Hu Qimu, a senior fellow at the Sinosteel Economic Research Institute, told the Global Times on Sunday.

China generated 17.9 billion kilowatt-hours of electricity on Tuesday, the first positive growth of daily electricity generation achieved since the Spring Festival in January this year, the latest data from the National Development and Reform Commission (NDRC) showed.

Meanwhile, China's electricity consumption of urban and rural residents increased by 2.4 percent on a yearly basis in January and February, the National Energy Administration announced on Friday.

As the COVID-19 pandemic showed signs of waning in China, the process of resumption of work and production of enterprises has been accelerating.

More than 90 percent of the major industrial enterprises in China's provincial-level regions, excluding certain areas like Hubei, which was hard-hit by the COVID-19, have resumed work and production, according to the NDRC.

"China's economy is resilient and has room to unleash its potential. The impact of the epidemic on the economy is generally short-term and controllable," said Hu.

And industry insiders expect that electricity consumption throughout the country will achieve positive growth in the second quarter and maintain steady growth throughout the year.