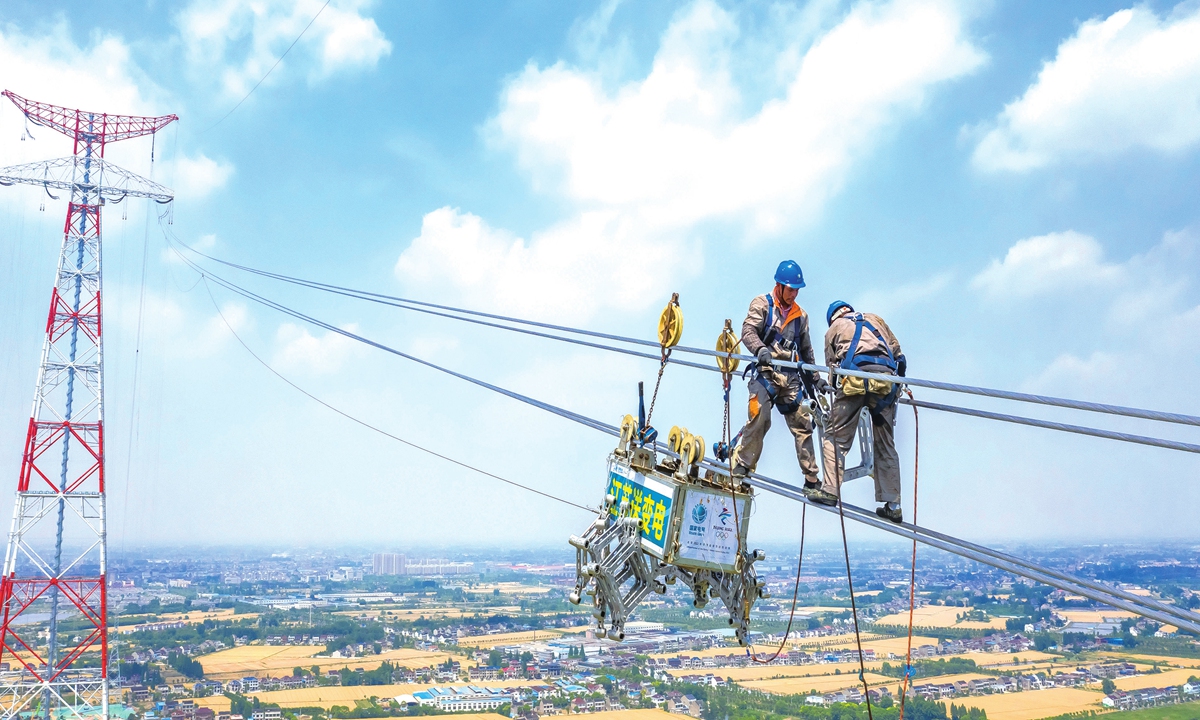 Construction site of the Yangtze River crossing pathway project for the new 500-kilovolt transmission line in East China's Jiangsu Province on June 1, 2022. Running from Fengcheng to Meili, the line will further support the integration of energy and electricity in the Yangtze River Delta. (Photo: cnsphoto)

Demand for electricity in many Chinese localities has set new records amid searing heat and robust factory activity due to an accelerating economic recovery from recent COVID-19 outbreaks.

Experts said that with efforts to avert shortages, China's power supply during the summer peak will be ensured and large-scale power rationing seen last year caused by volatile coal prices is not likely to happen again.
The maximum power demand so far this month reached 844 million kilowatts, and in Northwest China and North China, demand was up 8.81 percent and 3.21 percent from the same period last year, according to State Grid Corp of China.
State Grid's maximum power demand in Central China's Henan Province set a record of 65.34 million kilowatts on Sunday.
In East China's Jiangsu Province, maximum power demand exceeded 100 million kilowatts on June 17 for the first time this summer and 19 days earlier than in 2021.
State Grid supplies power to more than 1.1 billion people across 26 Chinese provinces, autonomous regions and municipalities.
Power demand has risen as temperatures climb, with homes and businesses cranking up air conditioning, Lin Boqiang, director of the China Center for Energy Economics Research at Xiamen University, told the Global Times on Tuesday.
Heat waves have hit parts of the country from the start of June. China's national observatory on Tuesday renewed an alert for high temperatures for 12 provinces and regions, with some regions such as North China's Hebei Province and East China's Shandong Province expected to reach over 40 C, the center said.
A return of factory operations after COVID-19 flare-ups were brought under control in regions including Shanghai also pushed up electricity consumption in major Chinese cities.
The year-on-year increase of electricity loads in many places and the early arrival of summer peak demand reflected the accelerating recovery of the Chinese economy and the resilience of China's economic fundamentals, Chen Jia, a research fellow at the International Monetary Institute of the Renmin University of China, told the Global Times on Tuesday.
"In response to economic stabilizing policies and relaxation of anti-epidemic restrictions, enterprises will take advantage of the summer to boost production, deliver orders and achieve a revenue balance this year," Chen said.
The searing heat and accelerated factory activity have prompted efforts to avert shortages. Governments at all levels adopted policies to ensure coal supply, which has a vital role in China's electricity generation.
Despite soaring international commodity and energy prices pushed by geopolitical tensions this year, the domestic coal price and output have been maintained.
From January to May, China's raw coal output reached 1.81 billion tons, up 10.4 percent from a year earlier, according to data from the National Bureau of Statistics (NBS).
China's top economic planner, the National Development and Reform Commission (NDRC), stressed on Thursday that it will strengthen coordination with relevant coal, oil and gas firms to ensure regular market supply across the country.
The NDRC said based on the current situation, the installed capacity of power generation is sufficient and coal storage across the nation's power plants is at a record high, laying a solid foundation to cope with the peak summer electricity usage.
To boost coal output and reserves to ensure power supply, the NDRC adjusted medium- and long-term coal contracts last December, which covered all coal production firms with a production capacity of 300,000 tons per year or above, and coal demand for key power generation and heating companies.
"These policies and measures have positive significance for stabilizing energy prices," Wu Wei, an assistant professor at the School of Management at Xiamen University, told the Global Times on Tuesday.
The domestic coal market will remain balanced between supply and demand, and the price will be stable within a reasonable range, Wu said.
The development of new energy sources such as wind and solar has maintained a fast growth momentum this year, which will help keep energy prices stable and ensure electricity supplies in the summer, Qi Haishen, president of Beijing-based Solar Tech Co, told the Global Times on Tuesday.
From January to May, electricity consumption in China increased by 2.5 percent year-on-year. The consumption of primary industry, secondary industry, tertiary industry and households was up by 9.8 percent, 1.4 percent, 1.6 percent and 8.1 percent from a year earlier, the NDRC said.