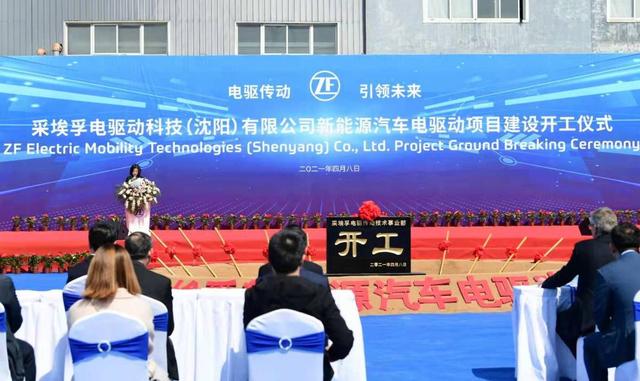 ZF Electric Mobility Technologies (Shenyang) Co., a branch under ZF Friedrichshafen AG, a leading automotive component supplier based in Germany, announced the launch of a new project on Thursday in Shenyang, capital of northeast China's Liaoning Province, marking a giant stride toward exclusive electrification of vehicles.

The products under this new project, which include core electric technologies such as new power trains for all-electric vehicles and the latest engine-driven power trains, will be used by several major NEV platforms home and abroad.

After it is put into operation, the project is estimated to generate about 2 billion yuan (about 305.24 million U.S. dollars) worth of annual sales for the company.

"Electrification is an irreversible trend worldwide," said Holger Klein, a member of the Board of Management of ZF Friedrichshafen AG, citing China's leadership in advancing the development of NEVs.

China has vowed to reach a peak of carbon dioxide emissions by 2030 and become carbon-neutral before 2060. To reach the goal, the country is ramping up efforts on shifting the domestic auto market into a greener one, as the sector is a large emitter.

In recent years, the Chinese government has unveiled more than 60 supportive policies and measures to enhance the development of the NEV industry and encourage people to purchase battery-powered vehicles. These efforts have achieved positive results and aroused people's enthusiasm.

The latest data from an industry association show that sales of NEVs surged 584.7 percent to 110,000 units in February, while the production and export of NEVs continued to set new records and maintained a relatively large scale over the same period.

China boasts the world's most sizable inventory of NEVs, accounting for 55 percent of global NEV sales. According to a development plan released by the State Council, automobiles in public transportation will be exclusively electrified by 2035, indicating an enormous growth potential in the world's largest passenger car market.

To get on board the fast train of green development, more and more overseas manufacturers in the electric vehicle industry are taking root in China.

Once the main component supplier for combustion engines, ZF has decided to exploit the new energy market after witnessing rosy prospects in China.

Calling the goals of carbon emission peak and carbon neutrality an "ambitious target," Klein said the company will spare no effort to support the objectives by providing high-tech gears to generate renewable energy.

He added that the company has a clear roadmap toward climate neutrality and is gradually transforming its entire footprint into carbon-neutral by 2040.

Meanwhile, foreign investment has also boosted this emerging market. German carmaker BMW announced in 2019 that it would increase investment in Shenyang by 3 billion euros (about 3.57 billion U.S. dollars) for expanding production and upgrading the product line to create a brand-new NEV ecosystem.

In 2020, the auto giant unveiled a new vehicle model -- the BMW iX3 -- its first fully electric vehicle produced in Shenyang. Besides, the first battery center for manufacturing fifth-generation high-voltage batteries was also set up in China.

China's "leading position in electrification and digitalization" is manifesting BMW's confidence for the positive long-term development of the market, noted Jochen Goller, president and chief executive officer of BMW China.

"We are continuously scaling up our investment in this regard, accelerating the transition from 'Made in China' to 'Created in China'," he added.