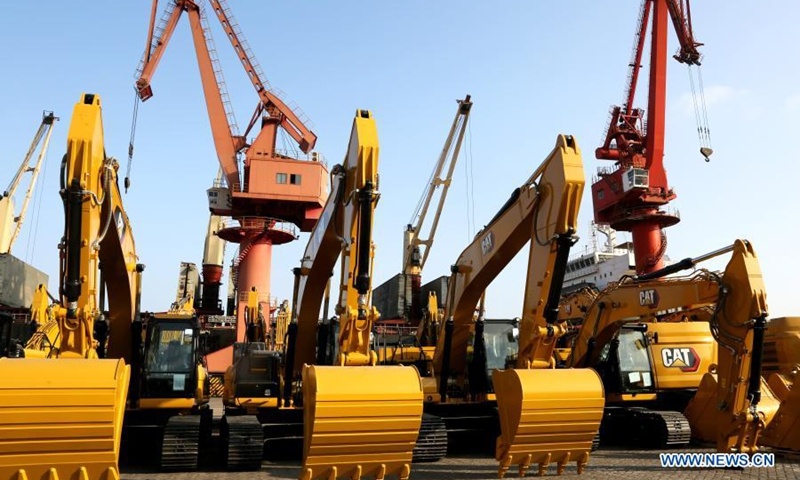 Excavators are seen at a port of a company in Lianyungang, east China's Jiangsu Province, Nov. 16, 2020.

Sales of excavators, often considered a barometer of China's economy, fell 9.24 percent year-on-year in July, reflecting an upgrade of infrastructure investment as the country shifts from extensive economic growth to high-quality development.

According to the China Construction Machinery Association (CCMA), a total of 17,345 excavators were sold in July.

July was the third consecutive month of decline. In May and June, excavator sales fell 14.3 percent and 6.19 percent, according to the CCMA.

CCMA deputy secretary Lü Ying said the figures reflected the impact of a lower base last year during the coronavirus pandemic. Sales fell in the first half of 2020 but rebounded along with the economy in the second half.

"Excavator sales won't show such rapid growth as they did in early 2021 for the whole year, and a correction is normal," he told the Global Times on Tuesday. Sales might fall for "many months" this year, he said.

Also, China has been curbing fixed-asset investment, which has caused demand to shrink for traditional construction machinery, experts said.

"Sales were affected by macroeconomic policies ... as growth in fixed-asset investment has been declining in China," Lü said.

According to the National Bureau of Statistics, infrastructure investment rose 7.8 percent on a yearly basis in the first half of this year, slowing from 11.8 percent in the first five months.

Growth in infrastructure investment is slowing amid fresh economic challenges, and many overseas analysts have scaled back their forecasts for GDP growth in China amid the resurgence of coronavirus infections in the country.

But the trend also shows the government's resolve to shift from an extensive economic mode to high-quality development, experts said.

Cong Yi, a professor at the Tianjin University of Finance and Economics, said that as China improves its economic structure, its infrastructure sector is shifting from traditional bridge and road building to construction of high-tech facilities, like 5G and AI, which need fewer machines such as excavators.

"China's industrial development will no longer depend on growth only, but will focus more on efficiency and quality," Cong told the Global Times, adding that the government's controls on the property market also put a lid on excavator sales.

These trends have spurred some concerns, such as whether private companies and China's labor force can adapt after an era of low-end manufacturing.

But Cong said that the industrial upgrade is also leading to changes in the labor market. "There are some imbalances... but I believe the situation will improve gradually with the emergence of new industries and the government's increased input in talent training."

Export demand will also offset some of the negative influences, experts said.

US Secretary of State Antony Blinken recently said that the US needs to invest in education, roads, railways, ports and broadband to remain globally competitive.

Chinese experts believe that the US will inevitably buy more Chinese machinery products for its infrastructure projects, despite its efforts to prevent China from benefiting from its development.

"In investment fields where the US lacks skills, the gap will be filled with Chinese products. Where competition exists, the US may implement barriers including extra trade tariffs and anti-dumping investigations against China," said Lü.