China’s export control laws to be used to break US ‘long-arm’ jurisdiction: analyst 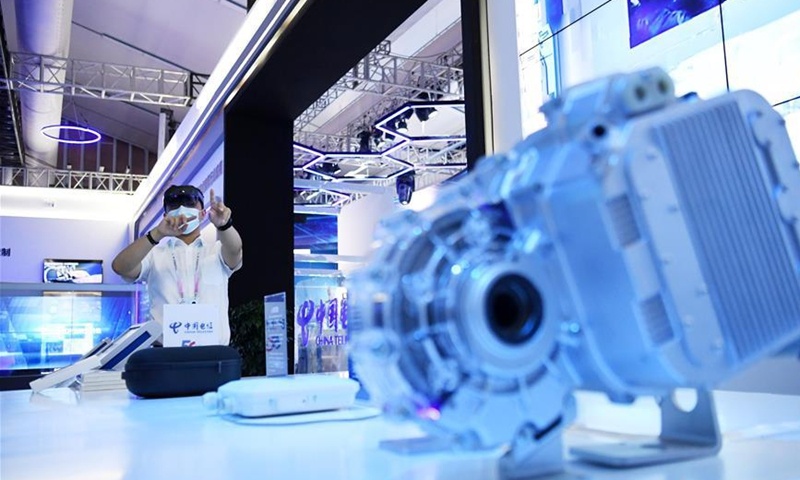 A staff member presents an exhibit during the 2020 Smart China Expo Online in southwest China's Chongqing Municipality, Sept. 15, 2020. The expo serves as a platform to promote global exchanges of smart technologies and international cooperation of the smart industry. (Xinhua/Tang Yi)

China's newly passed export control law, which authorizes the Chinese government to take countermeasures against any country or region that abuses export-control measures and poses a threat to China's national security and interests, could be used to break up the US "long-arm" jurisdiction on a growing list of Chinese companies in an increasingly brutal face-off between China and the US.

In particular, analysts highlighted, the new law could pave the way for state-sanctioned export bans on rare-earth metals, in what they described as a "no chips, no rare earths" tactic, with reference to the US' export control abuses against Chinese technology company Huawei Technologies Co.

The US' Trump administration has been abusing the concept of national security and using excessive export-control measures to cut off any supply of American products and technologies to Huawei to counter the company's rapid global rise. Further to restricting its domestic companies, the US even endangered global technology supply chains by coercing technology companies in other countries to comply with its export control measures, pushing Huawei to the brink of losing its smartphone business with stockpiles of chips set to run out next year.

Zhou Shijian, a senior research fellow at the Center for US-China Relations at Tsinghua University, said the malicious approach adopted by the Trump administration to kill off Huawei, one of the Chinese technology champions, has made the US eligible for reciprocal export control measures from China, as authorized by the newly adopted law.

"It makes no sense for the Trump administration to use chips made with rare-earth metals from China to suffocate some of the best Chinese companies," Zhou said. "It is time for China to respond to such insolent bullying by cutting off rare-earth metal exports to the US, affecting the chipmaking business of a number of US companies such as Qualcomm, Micron and Intel."

"The US fifth-generation joint strike fight F-35 uses 500 kilograms of rare-earth metals per plane... that should be stopped, too,"Zhou said, adding that Chinese rare-earth metal exporters implementing such bans could recuperate their losses from an insurance scheme citing the force majeure clause.

The export regulation serves as a retaliation against the US who have been suppressing Chinese companies, and will most likely restrict the export of rare-earth metals and integrated circuit boards, He Weiwen, a former senior trade official and an executive council member of the China Society for World Trade Organization Studies, told the Global Times.

"A significant proportion of rare-earth metals and integrated circuit boards in the US are from China," He said, "Although China agreed to the non-discrimination principle when it joined the WTO, it should not shy away from taking retributory action in response to the US's attacks."

China contributes around 70 percent of global rare-earth metal output, according to He. The US currently produces only 5 percent of the world's total integrated circuit boards, and relies heavily on imports from Asian countries, including China.

"Rare earth metals and integrated circuit boards are important materials for high-end technology sectors in the US," he said, "If China decides to cut supply to the US, it will cause chaos among US businesses."

The law comes as big Chinese companies such as Huawei, ByteDance's TikTok, Tencent's WeChat and even Semiconductor Manufacturing International Corporation find themselves on Washington's target list. The US is also reportedly mulling adding Ant Group to its trade entity list.

The Standing Committee of the National People's Congress, China's top legislature, passed the law on export control on Saturday after a third reading. The law will go into effect on December 1.

Besides authorizing China to hit back at countries abusing export-control measures, the law also clarifies that technical documentation related to the items covered by the law is also subject to export-control stipulations, potentially giving China some control in the pending sales of TikTok's overseas assets to US companies, including Oracle, analysts said.