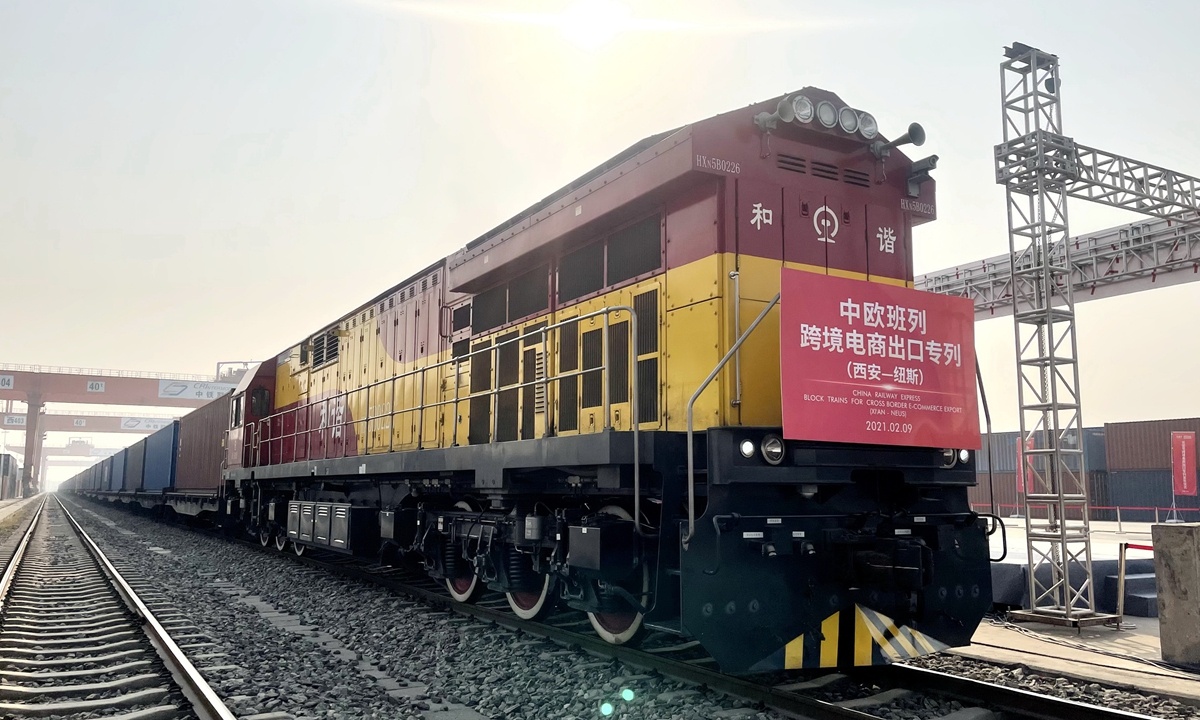 The first China-Europe freight train featuring e-commerce exports since the New Year leaves Xi'an, Northwest China's Shaanxi Province for Germany on Tuesday. It carried bags, clothing and accessories, and the products will be distributed to Belgium, Italy and other countries. (Photo: IC)

Amid a strong recovery in the domestic economy and strong demand from the overseas market, China posted a 50.1 percent year-on-year growth in its exports during the first two months of 2021, China's General Administration of Customs said on Sunday.

Exports reached 3.06 trillion yuan ($472 billion) during the January-February period, while imports also rose by 14.5 percent from last year's level to reach 2.38 trillion yuan, according to GAC data which was released on Sunday.

The trade surplus for the two months reached 675.86 billion yuan, compared with a deficit of 43.3 billion yuan for the same period last year.

Recovering markets in the EU and the US drove China's export rise, continuing the trend of rapid growth witnessed since June last year, with exports headed for Europe, the US and Japan increasing 59.2 percent year-on-year, GAC said.

Meanwhile, the "stay-put" policy implemented in Chinese localities during the Spring Festival period means factories were able to deliver orders uninterrupted by the long holiday.

A stable recovery on the domestic front helped boosted imports, with the import volumes of integrated circuits, iron ore and crude oil increasing by 36 percent, 2.8 percent and 4.1 percent respectively during the first two months.

The GAC said the exceptionally high trade figures are partly due to the low base from the first two months of 2020, when China's foreign trade was decimated by the outbreak of the COVID-19 pandemic, but the agency said even compared with data from 2018 and 2019, the 2021 foreign trade growth in January and February remains at more than 20 percent.

The GAC said more Chinese exporters are expressing bullish views on the prospect of exports in the next two to three months, but at the same time warned that uncertainty remains for foreign trade given the pandemic situation.

ASEAN was China's largest trading partner in the first two months of this year, with China's trade with ASEAN members up 32.9 percent to hit 786 billion yuan, accounting for 14.4 percent of China's overall trade in the two months.

China-US trade got off to a good start in 2021, with bilateral trade rising 69.6 percent to 716.4 billion yuan in the period. The US is now China's third biggest trading partner after ASEAN and EU.