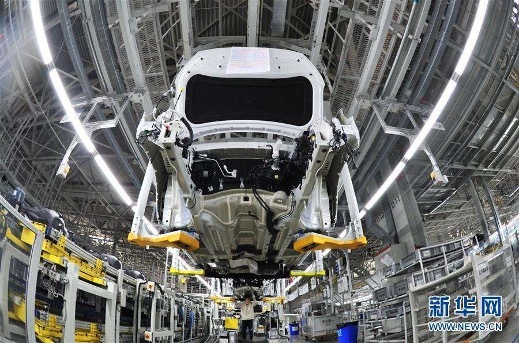 China’s factory activity expanded at a stronger pace in June, signaling that the country’s economic recovery is gaining momentum, The Wall Street Journal reported on June 30.

The uptick, above the 50.4 forecast in a Reuters poll of analysts, was underpinned by China’s “quickening pace of expansion in production”, wrote Reuters on June 30.

PMI is an index of the prevailing direction of economic trends in the manufacturing and service sectors. A PMI above 50 represents an expansion when compared with the previous month.

According to Reuters, the forward-looking total new orders gauge “brightened”, rising to 51.4 from May’s 50.9, which suggested “domestic demand is picking up as industries from non-ferrous metals to general equipment and electrical machinery all showed an improvement”.

The non-manufacturing PMI rising to 54.4 from 53.6 in May also showed “steadily stabilizing business confidence,” it said.

“The latest survey data suggest that economic growth accelerated in June thanks to a faster recovery in manufacturing and services, alongside continued strength in construction activity,” Julian Evans-Pritchard of Capital Economics told Russia Today (RT), adding that the recovery should remain robust in the coming months.

Why China is better prepared

China has suffered its first contraction on record due to the COVID-19 pandemic, and has been well prepared for a possible crisis for a long time, according to a report by RT, citing a number of economists.

“Nobody, including Beijing, could have foreseen the depth and gravity of this pandemic, specifically the cryptic transmission parameters by which the COVID-19 virus spreads. It is truly a once-in-100-year pandemic event,” said Sourabh Gupta, senior fellow at the Institute for China-America Studies, adding China was better prepared because “it is in a much healthier fiscal position compared to most advanced economies and many emerging economies too”.

China’s central government’s debt level as a percentage of GDP is fairly modest, which means there is ample space on the government’s balance sheet to increase policy support, Gupta explained. Moreover, consumers’ debt level relative to income is modest, so they are not over-leveraged either and can “open up their wallets,” he added.

“Despite US decoupling, the complexity of modern production processes makes it virtually impossible to delink everything from China, ranging from materials like rare earths to components and parts, even logistics as most of the world’s largest container ports are in China,” said Leung. China is also rapidly upgrading its cutting-edge technologies including 5G and AI, he added.

There is no need to look for some targeted actions by the Chinese government to prepare the country’s economy for the next crisis, as China’s economy has become more stable over that past decade, said Sergey Lukonin from the Institute of World Economy and International Relations.

According to Gupta, the Chinese economy will be in the growth column later this year and will even end the year with positive growth. “There will be no V-shaped recovery and certainly growth will be nowhere near the pre-COVID-19 six-percent target. It will be more like the one to two percent range,” he said.