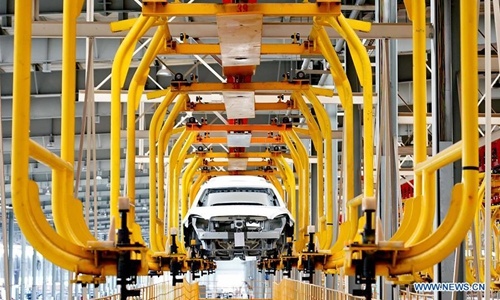 The manufacturing purchasing managers’ index (PMI), a closely watched gauge of China’s manufacturing activity, registered lowest in history in February due to the impact of the coronavirus outbreak on the country’s businesses and production; however, analysts predict the figure to rebound considerably in March.

All the 21 manufacturing industries have fallen back into the territory of contraction– below 50 percent. Pressure on the imports and exports in the manufacturing sector has mounted this month as a result of delivery cancelations in some companies triggered by apparent delays during the epidemic, Zhao Qinghe, a senior statistician with the NBS, said in a statement on Saturday.

Index for non-manufacturing business activities slumped to 29.6 percent in February, down 24.5 percentage points month-on-month as the coronavirus has hit hard the services sector.

Such consumption sectors that usually deal with the vast array of transport, accommodation, and catering as well as tourism have all encountered a sudden demand plunge in their business indexes, all below 20 percent, according to the NBS.

Operation resumption rate for large and medium-sized enterprises is expected to rise to 90.8 percent by the end of March, and for the manufacturing sector, it is likely to reach 94.7 percent, according to Zhao.

“The fast speed in operation resumption will shore up PMI in March,” said Zhao.

“Currently, the economic expectation is improving as the epidemic has seen some effective control, and the production and demand end will largely rebound after the virus is contained, bolstering the manufacturing sector,” said Liu Xuezhi, an economist at the Bank of Communications.

“The PMI in February did not fall beyond expectationsince both manufacturing and non-manufacturing industries have taken a hit of the coronavirus,” said Zhang Ming, chief economist at Ping An Securities.

The pharmaceutical industry will surely stand out as it is not much affected but boosted. Industrial manufacturing and producer services will be the first to recover, said Sang.

A flurry of measures that were recently announced by China’s central government to help recover the economy will well support the manufacturing sector after the coronavirus epidemic ends, Liu noted adding that the impact of the outbreak on China’s economy surpassed that of the global financial crisis in 2008.

An official with the People’s Bank of China (PBOC), the country’s central bank, said Thursday that inclusive monetary policy tools will be used to support resumption of micro-, small as well as medium-sized enterprises according to the principles of market rules and laws.

The PBOC said it was releasing 500 billion yuan ($71.3 billion) to banks for loans to small and medium-sized enterprises, on top of 300 billion yuan announced earlier this month.

“In fact, the Chinese government has already adopted many measures, such as postponing the payment of social security and housing provident fund, cutting taxes and fees in specific industries, and subsidies provided to certain small and medium-sized enterprises. Works have been done to fix the current situation,” said Zhang.

“There are likely two or three RRR cuts this year, and 20 basis points of interest rate cuts this year. More active open market operations can be seen as well, according to Zhang.

“The central bank has implemented a relatively large dose of monetary easing, but it also faces problems. Even when monetary easing is used to promote economic recovery, there will be inflationary pressure. Now the CPI is rising rapidly under the epidemic, which is likely to form many bad assets,” Sang noted.