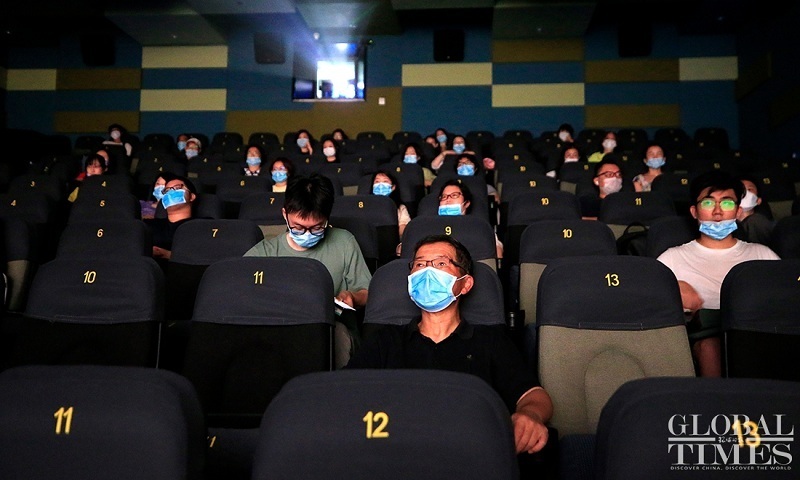 People enjoy a movie at a cinema in Shanghai on July 20, the first day that China’s film authority allowed theatres in COVID-19 low-risk areas to reopen to the public.(Photo: agencies)

During the eight-day National Day holidays, China's box office received a strong boost from the first festive season when people can go out and enjoy themselves since the COVID-19 outbreak. Despite audience numbers capped at 75 percent of their total capacity in cinemas nationwide for epidemic prevention, the country's total box office so far since the holiday started has reached 1.5 billion yuan, making it the second biggest third day National Day holiday box office in history.

Jiang Ziya: Legend of Deification - a Chinese animated film originally set to be released during the Spring Festival in February - has grossed more than 800 million yuan as of Saturday. Its revenue on opening day—400 million yuan—broke the record set by another animated film, Ne Zha, last year.

Disney's live action remake of Mulan had a disappointing box office amid complaints in China, but the movie has generated 277 million yuan since it was released on September 11.

The exponential growth in revenue has led industry insiders to predict that this year's total revenue for the National Day holidays might reach about five billion yuan, the same level as last year's.

"The biggest concern for moviegoers was infection risks in a close, intimate setting like movie theaters. The concern has since disappeared as the pandemic has been brought under control in China, the theaters are bound to enjoy a revenue recovery during this holiday season," Lin Lin, film curator for the UCCA Center for Contemporary Art, told the Global Times.

However, with more than 271 million cinema visits and 26.48 million screenings, total  revenue so far this year has only reached 10 billion yuan ($1.47 billion) as of Saturday, which would fall far behind last year's revenue.

The film industry was one of the most heavily affected sectors by the COVID-19 lockdown.

In April, the China Film Administration predicted that the sector would suffer 30 billion yuan, with movie theatres shut down until the end of July.