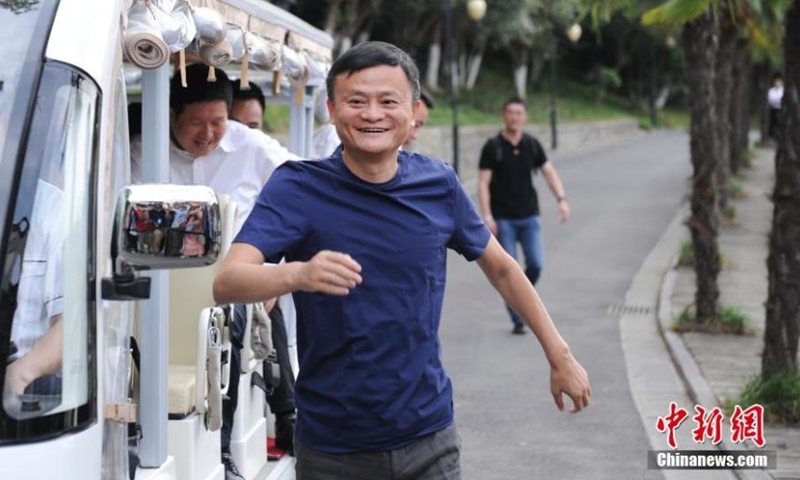 Jack Ma, founder of Alibaba Group, is seen on his way to a hot pot restaurant in Hefei, Anhui Province on June, 6, 2020. These Anhui medical workers had helped fight the COVID-19 in Hubei Province. (Photo: China News Service)

Jack Ma, the renowned Chinese billionaire and founder of Alibaba Group, called for a healthy financial system in China, in which more individuals and enterprises will find it easier to seek financial support.

Ma's remarks were made during the second Bund Summit which kicked off in Shanghai on Friday and will run until Sunday.

"Unlike Europe, where the financial system has been operating for decades, the current risk for China is not a systemic financial risk, instead it is the risk of the lack of a healthy financial system," Ma said.

He compared China's financial industry to a youngster still in the adolescent phase, like other newly-emerging developing countries, which lack a mature ecosystem.

China's financial system is still dominated by big state banks which are like "big rivers", yet in an ecosystem, "we need ponds, creeks and small channels, without which, floods and droughts will always happen here and there," Ma said.

The only criteria to assess the system is whether it is inclusive, green and sustainable, and whether cutting-edge technologies such as big data, cloud computing, and blockchain play a decisive role, according to the entrepreneur.

In terms of inclusiveness, Ma projected the picture of a future financial system: one which could help 80 percent of small businesses and young people instead of the current 20 percent. "Money should find people and businesses, instead of the other way around as in the past," Ma noted.