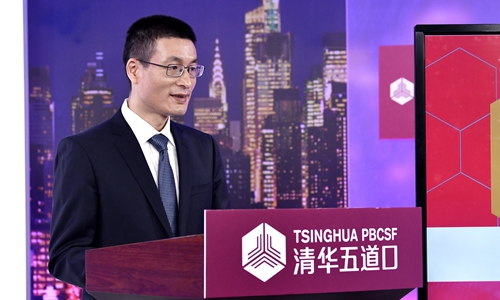 China grasped upon a pivotal window of opportunity in 2019 for its financial sector to be market-oriented, law-based, and globalized, well-equipping its markets to weather a coronavirus-induced global financial tsunami in 2020, Lu Lei, deputy head of China's foreign exchange regulator, said on Saturday.

"We had faced external shocks arising from China-US trade frictions in 2018 while the fallout of the pandemic has triggered a global financial storm and risks of economic depression," Lu said at the 2020 Tsinghua PBCSF Global Finance Forum while releasing an annual report on China's financial policy.

He cited the rollout of the STAR Market in Shanghai and trials are given to a registration-based IPO system, an orderly push for structural deleveraging, the announcement of new asset management rules, ramped-up deregulation of foreign shareholding limits on banking, securities and insurance sectors, and a drive for regional financial opening in Shanghai, the Guangdong-Hong Kong-Macao Greater Bay Area and the Hainan Pilot free trade zone.

A raft of financial deregulation efforts in 2019 included a steady push for the yuan's internationalization, capital account convertibility, trade and investment freedom and convenience being essentially intended to leverage a continued decline in real economic trading costs to hedge against increased costs globally in the wake of anti-globalization and populism, thereby maintaining the global competitiveness of China's real economy while advancing healthy development of the global economy, according to Lu, also a member of the Strategic Council at Tsinghua's PBCSF.

He cautioned against monetary policy spillovers though, advising a look back at monetary crises that had occurred in history and an insistence on the buildup of a two-pronged framework that ensures monetary needs serving the real economy as well as macro prudence for the sake of financial systemic stability.

The central banks of at least 15 economies globally have normalized quantitative easing, stirring contention over financial theories and policies.

In a speech at the forum, Ruan Lu, director of the Chongqing Local Financial Supervision and Administration Bureau, also stressed that the fallout of the pandemic on regional financial assets in quality and risks terms cannot be overlooked. He called for financial diagnosis and precise responses to potential risks.

The nation will step up its push for new financial laws and rules, including the central bank law, the commercial banking law, deposit insurance regulations, and local financial supervision regulations, Lu revealed at the forum, urging more efforts in making the financial sector more market-oriented and law-governed.

In a sign of progress, the Shanghai Financial Court, the first and only one of its kind in China with only 28 judges, had closed 10,630 cases as of April since its establishment in August 2018, involving over 227.7 billion yuan ($32.06 billion), Xiao Kai, vice president of the court, disclosed at the forum.

As part of efforts to improve the rule of law in the financial arena, the court earlier this year introduced the nation's first mechanism for securities dispute litigation representatives that includes the Chinese version of class action lawsuits.

Starbucks rival Luckin Coffee has been embroiled in a sales fraud scandal since early April when the NASDAQ-traded Chinese coffee chain revealed findings of an internal probe, shining attention on information disclosure by and financial integrity of Chinese firms.

A toughening regulatory clampdown on accounting fraud and other kinds of financial misconduct has been pledged accordingly.

The nation will hold a zero-tolerance policy toward financial fraud, among other malicious unlawful and irregular practices, Yi Huiman, chairman of the China Securities Regulatory Commission (CSRC), said on the annual national investor protection publicity day which fell on Friday this year.

The revised Securities Law has massively increased legal liabilities for severe violations such as financial fraud, according to Yi, pledging that the commission will make full use of its supervision authority empowered by the new law, meting out heftier penalties.

Modern information and technology tools including big data and artificial intelligence will be fully tapped to improve oversight and law enforcement efficacy, he said.

In a fresh ruling, the CSRC announced on Thursday a fine of 600,000 yuan, the maximum for securities violations, for Shanghai-listed Kangmei Pharmaceutical Co. The firm's 21 employees were ordered to pay fines of between 100,000 yuan and 900,000 yuan and six executives were blacklisted by the securities regulator for 10 years to a lifetime.

The major Chinese drug maker, previously a constituent of MSCI's global indices, said in April 2019 that it overstated cash by nearly 30 billion yuan in 2017 due to an "accounting error."