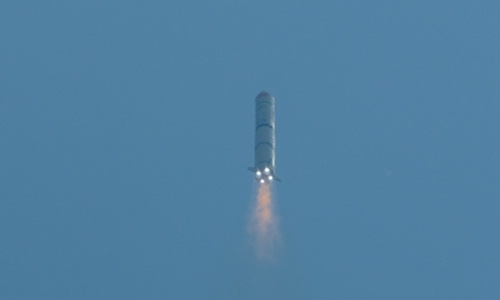 China's first low-earth orbit (LEO) satellite project that can provide data service for the Internet of Things (IoT) will be established at the end of next year by the privately owned Beijing Guodian High-tech Co, the company told the Global Times on Sunday.

The project will be made up of 38 LEO satellites, seven of which are already in orbit, and it can provide IoT-related data service, the company said. The project will be incorporated with the 5G system on land and the Beidou Satellite Navigation system to form an ecosystem of IoT satellites.

The satellite internet, listed as a category of "new infrastructure" in China alongside 5G, the IoT and artificial intelligence, is expected to see significant growth. According to Xing Qiang, an expert at Small Rocket Studio, LEO satellites are one of the best solutions for data transmission in remote areas in China, where it is technologically challenging to set up traditional fiber optic network equipment.

"Although most cities have access to fiber optic network equipment, around 70 percent of the nation's land, mostly unpopulated, still has no access to networks," Xing said.

Satellite internet systems have been developing fast globally in recent years. According to the Xinhua News Agency, the number of satellites in orbit will increase tenfold in the next decade, and most will be LEO telecommunications satellites. The US company SpaceX has an ambitious plan Starlink, which aims to launch nearly 12,000 satellites into low orbits for internet coverage.

Compared with traditional internet access based on base stations, satellite internet systems offer high data speed, and can cover a wide area regardless of terrestrial conditions, according to Xing. In mountainous regions, much information on the local environment needs to be collected manually, and satellite internet is one of the more cost-efficient ways of providing internet access to remote areas, according to Xing.

According to Lü Qiang, chairman of Beijing Guodian High-tech, the company is planning a system that can mobilize the IoT satellites, remote sensing technology and 5G, which will be able to monitor the environment and give warnings ahead of natural disasters.