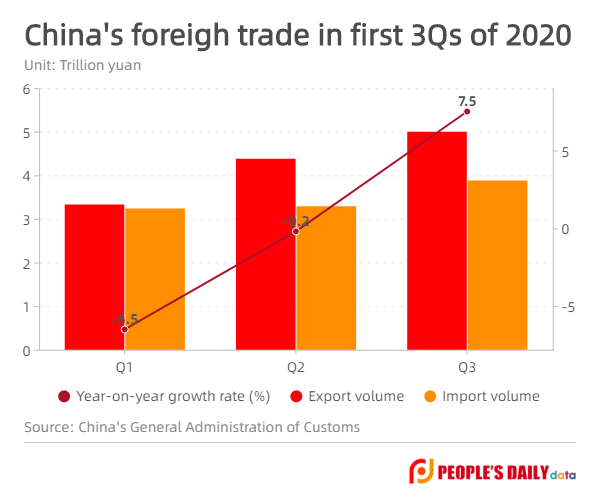 BEIJING, Oct. 13 (Xinhua) -- China's foreign trade has emerged from the woes of the COVID-19 pandemic and registered strong growth in the third quarter (Q3), thanks to a string of government support policies.

The quarterly values of both imports and exports hit record highs in Q3, according to GAC spokesperson Li Kuiwen.

The rebound came despite the rise of protectionism and unilateralism this year amid the spread of the pandemic, Li said, adding that the country's trade structure also improved during the period.

General trade, involving longer production chains and better reflecting the country's manufacturing strength, edged up 2.1 percent during the nine-month period, taking a larger share of the total trade of goods, he said.

Private companies played a significant role in propelling trade growth, with their foreign trade expanding by 10.2 percent in the first three quarters.

The country's central and western regions contributed more to trade amid further opening-up measures, with foreign trade in the two regions up 8.3 percent year-on-year during the period.

The Association of Southeast Asian Nations remained China's largest trading partner in the first nine months, followed by the European Union and the United States, while trade with countries along the Belt and Road rose 1.5 percent, GAC data showed.

China has rolled out a series of policies including streamlining procedures at customs and cutting costs for firms to mitigate the impact of COVID-19 on foreign trade.

The customs clearance time was reduced for the fifth consecutive month in September, Li said.

The country has also introduced incentives for cross-border e-commerce and other forms of innovative trade to support sustained trade growth, he said.

As China further implements pro-trade policies and pushes a new development pattern, the country is likely to see upward momentum in the economy and foreign trade, Li said.