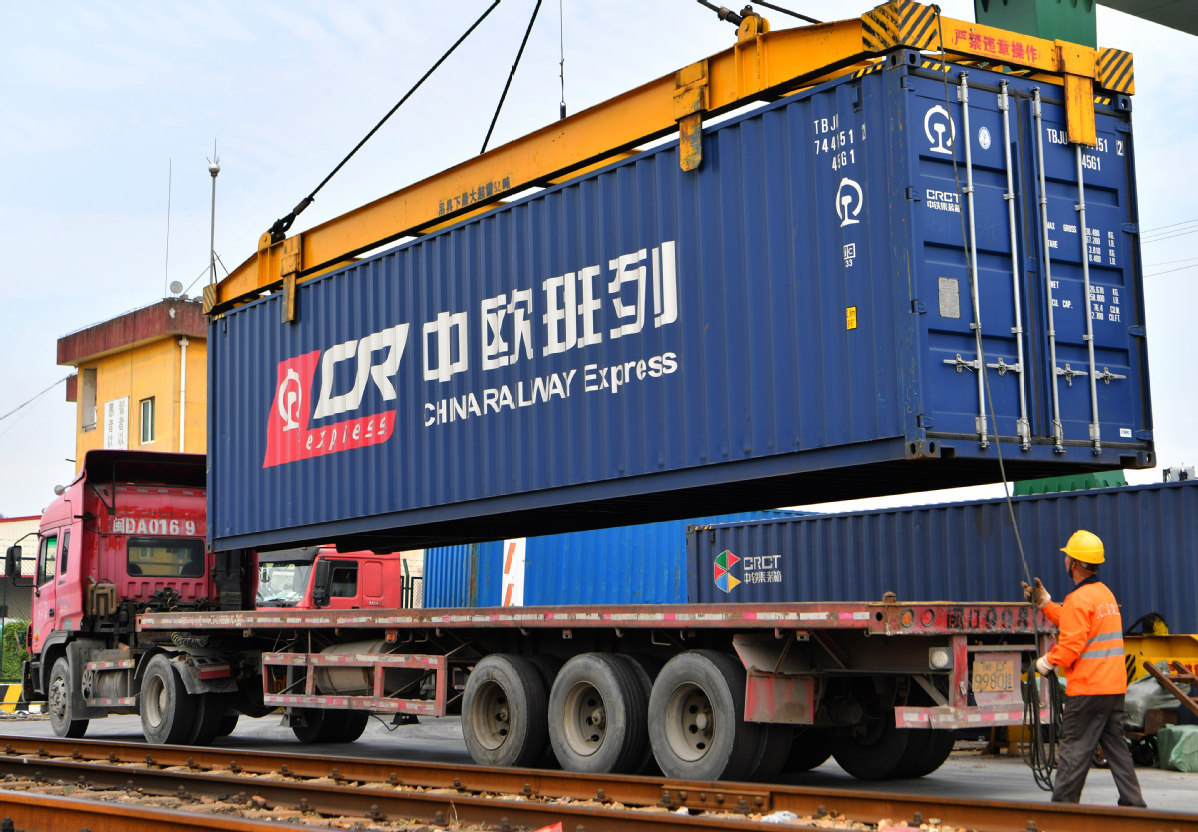 A worker oversees loading of a container onto a Europe-bound cargo freight in Xiamen, Fujian province. (Photo: Xinhua)

China's foreign trade is expected to show a stable recovery in the second half of the year on the back of a notable improvement in the industrial, supply and service chains as well as from major trade events like the upcoming Canton Fair and the third China International Import Expo, industry experts said on Wednesday.

Since production and service sector operations have commenced in many countries, exports of China's non anti-epidemic materials will gradually recover, said Sang Baichuan, an economics professor at the University of International Business and Economics in Beijing.

Though there have been many uncertainties such as order cancellations and delays, as well as poor logistics in recent months, China's export-oriented companies must keep an eye on the actual demands in the international market, make timely adjustments to their product structure and deploy more resources for developing the domestic market so as to adapt to the new situation, they said.

After the epidemic broke out, China has rolled out a wide range of policies and measures to help exporters resume production. The government introduced incentives to give firms financial support, help employees return to the workplace and reduce operational costs, according to the Ministry of Commerce.

Rather than moving its plants to Southeast Asia, Jinjiang, Fujian province-based Fujian Fynex Textile Science and Technology Co decided to invest 850 million yuan ($119.56 million) to build a new factory in Jinjiang earlier this year. Its plan is to facilitate its business transformation from an original equipment manufacturer to a high-end clothing maker and green textile material provider.

Apart from partnering with more than 100 research institutes and universities within China to push its innovative ability, the company will install automated production machines and adopt the latest environmentally friendly technologies to produce both clothing and materials.

Chen Bin, executive vice-president of the China Machinery Industry Federation in Beijing, said it is vital for China to boost exports in sectors such as passenger vehicles, electronic products, furniture, clothing and foodstuffs as they involve a large number of upstream and downstream industries with millions of industrial workers in both domestic and global markets.

Affected by the COVID-19 outbreak, China's foreign trade volume fell to 9.07 trillion yuan in the first four months of this year, declining 4.9 percent year-on-year. However, the country's imports and exports recovered in April, according to the General Administration of Customs.

In addition to securing orders from developed markets, China's export-oriented companies should also seek to tap the potential of demand in other BRICS countries (Brazil, Russia, India, China and South Africa) and the Association of Southeast Asian Nations, as this can provide more space for the expansion of China's exports, said Yu Miaojie, deputy dean of the National School of Development at Peking University.

Wei Jianguo, vice-chairman of the China Center for International Economic Exchanges, said the government's Hainan free trade port plan will boost industrial chains in the Asia-Pacific region and boost trade with the ASEAN members, and its market positioning will be different from Singapore and the Hong Kong Special Administrative Region.