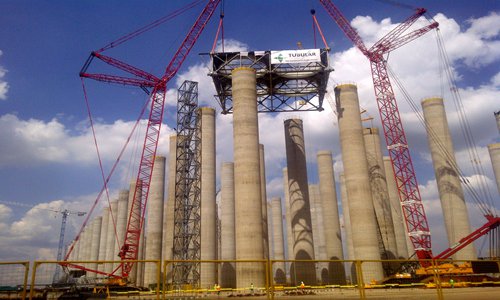 For instance, the 760-kilometer Addis Ababa-Djibouti railway adopted China's electrified railway standards, which also helped generate more than $400 million worth of mechanical and equipment exports from China to Africa, China Railway Construction Corp (CRCC), one of the project operators, said in a document sent to the Global Times on Sunday.

Most of the infrastructure projects in Africa such as the Mombasa-Nairobi Standard Gauge Railway (SGR) in Kenya and Abuja-Kaduna rail in Nigeria were also built in line with Chinese railway design standards.

"Chinese standards have been widely used in Africa's infrastructure sector as they could meet local demand with lower costs," Cheng Cheng, associate research fellow with the Chongyang Institute for Financial Studies at Renmin University of China, told the Global Times on Monday.

Chinese enterprises have absolute advantages at the low and middle ends of the engineering, procurement and construction (EPC) process, so no Western companies could compete with their Chinese counterparts, Cheng noted.

Still, some Chinese companies have also had fierce debates on standards with rivals from Europe in terms of project technical specifications during the construction process.

For example, when it came to the design of the Gantas Tunnel in Algeria - the longest railway tunnel in North Africa - CRCC offered different design solutions from another company that was based in Europe. This discrepancy exposed a significant gap between China and Europe in terms of engineering theories, norms, construction habits and concepts, the company told the Global Times.

"After a 30-meter trial construction with Chinese solutions, CRCC's proposal was finally accepted by local owners and the European design firm," it added.

Along with infrastructure investment, Chinese companies have been transferring technology and talent to Africa.

Due to the lack of maintenance talent in the wind energy sector in Africa, Chinese heavy machinery company SANY Group brought a large number of professional staff from China to Ethiopia to support the Adama II wind farm project's maintenance. This decision helped the local wind sector grow, the Hunan Province-based company said in a statement sent to the Global Times on Monday.

Back in the 1990s, China's investment in Africa helped train the first generation of industrial workers, and the apprenticeship model has prevailed among Chinese companies operating there, Cheng noted.

"The fundamental edge of China's presence in the African market is not the support of the Chinese government but Chinese companies' capability of exporting the full supply chain to local markets," he said.