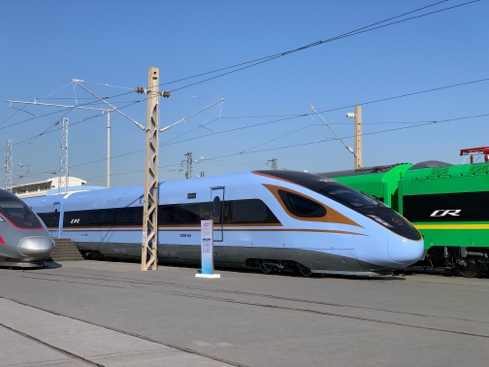 A CR300BF travels at a speed of 250 km/h and is light blue, a Chinese metaphor implying that newcomers will surpass their predecessors. (Photos: CGTN)

The newest bullet trains to hit China's tracks will take us into an exciting new world of travel in 2019. China's national rail operator, China Railway, says that the new "Fuxing" family of trains will be in use soon.

For the first time ever, the state-of-the-art Fuxing bullet trains took a family photo for the public in Beijing on Monday.

While sharing the same basic design, they vary in speed and purpose. The new bullet trains include a CR300BF and a CR200J, which respectively stand for their speeds of 250 km/h and 160 km/h.

Two previously CR400AF trains have debuted as 17 carriage-trains, the longest ever in the Fuxing family. They can still travel at a speed of 350 km/h while carrying more than 1,280 passengers, up about 7.5 percent than previous CR400 trains, which recorded a maximum speed of 350 km/h when it traveled between Beijing and Shanghai in June 2017.

As for the new unveiled models, Zhang Bo, a researcher from the China Academy of Railway Sciences (CARS), said that they are more comfortable, and help reduce manufacturing and operation costs, while improving energy efficiency and conservation.

The former will soon join hands with existing trains to transport riders during the Spring Festival travel rush.

The latter is being tested and scheduled for use a year from now.

All three family members will lead or replace the current Chinese trains, according to China Railway.

But the Fuxing bullet trains are the epitome of China's high-speed railway industry, as they have strong scientific research and development behind them. China's national rail operator said that various local technologies have helped solve problems in fields like paving and maintaining roadbeds and tracks, as well as building safe bridges and tunnels for the bullet trains. 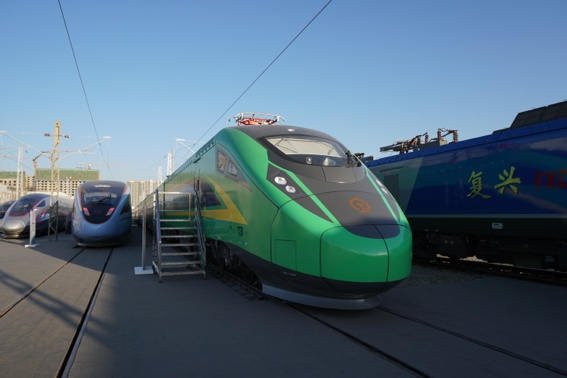 The green CR200J travels at a speed of 160 km/h and will gradually replace the current slower bullet trains.

And efforts to further improve train infrastructure are being carried out by the entire Chinese railway industry. Hu Suoting, a researcher and also the director for the Science & Technology Department in CARS, said that efforts include engineering, equipment management, security, as well as information and intelligence technologies, which they will focus on more.

Hu said that lining up in front of ticket offices is gradually becoming a thing of the past, and e-tickets will eventually become the norm.

By the end of the year, bullet train lines in China will cover 29,000 kilometers, accounting for two-thirds of the world's total.

And next, China will develop and equip smarter trains, which experts say will be in use by the 2022 Winter Olympics, with more channels opening for faster and safer trips. 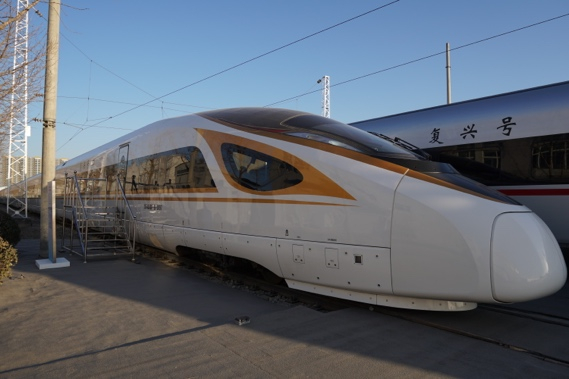 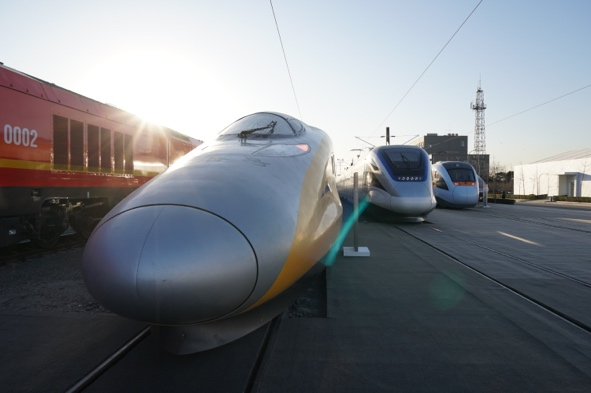 Among the bullet trains showcased on Monday, there are also trains other than the three bullet trains with speeds of 350, 250 and 160 km/h. The trains in the photo are the pilot test train, the previous Hexie or Harmony, and a future smart high-speed train. Their status will be revealed in the days to come.