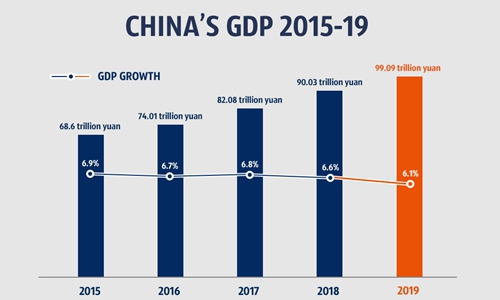 The Chinese economy grew 6.1 percent for 2019, in line with the 6-6.5 percent goal as the world's second-largest economy demonstrated resilience with an improved structure to cap a year marked by a US-driven trade war, official data showed.

Friday's GDP reading indicated a continued slowdown for China's economic growth from 6.6 percent in 2018 and 6.8 percent in 2017.

It is the weakest reading in 29 years but in line with the 6-6.5 percent annual growth target.

The data is closely watched by global markets analysts and is used to gauge the performance of the world's second-largest economy in a year characterized by slow economic growth and contracting trade. It is also used to access China's growth potential for 2020, which is expected to be a challenging year.

"The newly released data was basically in line with market anticipation, or even better than some institutions have forecast," Lian Ping, chief economist at Bank of Communications, told the Global Times on Friday.

Chinese economists said the growth was the result of the country's improved economic structure which included a steady transition from manufacturing to the services sector. Financial deleveraging and debt stabilization from the past two years also helped.

China champions globally with its 2019 GDP growth, NBS head Ning Jizhe said at a press conference on the release of the major annual economic data on Friday.

The 2019 GDP performance laid a solid foundation for China to achieve new progress during the 14th Five-Year Plan (2021-25), Niu Li, a senior economist at the State Information Center, told the Global Times.

The Chinese economy is also headed toward positive growth in the mid- and long-term with emerging industries and services sector expansion driven by the world's largest consumer market with 400 million middle-class consumers, Niu said.

Friday's GDP reading will serve as a reference among Chinese economists on whether the country would maintain a key psychological level of six percent growth rate in 2020. Officials will publish the country's GDP growth target in March.

The data also follows a phase one trade deal inked between China and the US on Wednesday. Analysts believe the deal will shore up China's GDP growth in 2020. Exports are a key component of GDP statistics but China's foreign trade contracted a small margin in US dollars in 2019, and partly due to the 22-month trade dispute with the US, according to the Chinese customs authority.

The negative impact from the tariff increases should diminish after the second quarter, and China's export growth is expected to return to positive territory in 2020, Tang Jianwei, an economist at Bank of Communications, told the Global Times, adding that there will be a pick-up in risk appetite in manufacturing investment due to improved outlook in trade with the US.

The phase one deal could boost China's GDP growth to 6 percent in 2020 as opposed to an earlier forecast of 5.8 percent, according to the International Monetary Fund (IMF).

Niu Li, the economist at the State Information Center, pointed out the turbulent external environment so far in 2020, such as the US-Iran conflict, needs to be monitored.

There are also risks that the US might go back on its words to escalate the trade war against China, and there would be back-and-forth in trade talks between the two major economies, adding certainty to the already fragile world economy.

Rising inflation spurred by an African swine fever outbreak that sent pork prices soaring, is another factor, according to analysts, that could hinder GDP growth.

Biswas pointed out that Chinese policymakers may not need to dig too deep into their policy toolkit during 2020, after having used a wide range of monetary policy and fiscal policy stimulus measures during 2019 when the trade war with the US was at its peak.

However, "if additional measures are needed during 2020, the scope for additional monetary policy measures may be constrained by the recent pick-up in headline inflation, at least till inflation pressures from higher foods prices ease off," Biswas said.