China's economy grew 6.6 percent year on year in 2018, above the official target of around 6.5 percent, data from the National Bureau of Statistics (NBS) showed Monday, Xinhua reported. It is the first time that China's GDP surpasses 90 trillion yuan.

The reading was lower than the 6.8-percent growth registered in 2017. 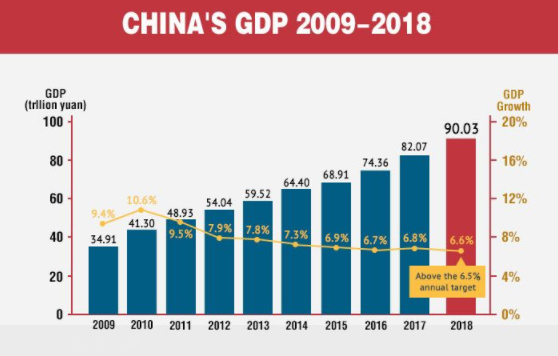 Growth in the fourth quarter came in at 6.4 percent, down from 6.5 percent seen in the third quarter, NBS data showed.

China's economy has performed within a reasonable range in 2018, with economic growth being generally stable and improvement achieved in performance, Ning Jizhe, head of the NBS, said at a press conference.

Gross domestic product (GDP) totaled 90.0309 trillion yuan (about $13.28 trillion) in 2018, with the service sector accounting for more than half of the total.