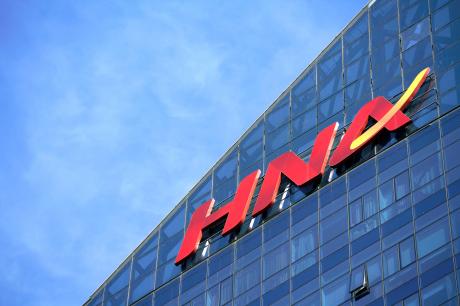 A HNA Group logo is seen on the building of HNA Plaza in Beijing, China February 9, 2018. REUTERS/Jason Lee

The facility is intended to help HNA Group in its “strategic transformation”, along with the development of Hainan’s aviation industry, HNA Group said in a statement.

The agreement represents a shift from two months ago, when Citic Bank expressed concern about HNA’s liquidity problems, including repayment of a commercial acceptance bill. Citic Bank said in a statement at the time that it was working with HNA Group to resolve the issue.

HNA Group is facing a liquidity squeeze that has prompted the conglomerate to initiate a widespread restructuring, selling real estate and shares, after a $50 billion spending binge left it with massive debts.

HNA told major bank creditors last month that the group is facing a potential cash shortfall of at least 15 billion yuan in the first quarter of the year.

Scrutiny of the group’s ability to repay its borrowing is widespread, and even a missed pre-payment on a 1.7 billion yuan trust loan earlier this week drew widespread attention.

On Friday, HNA Group (International), an offshore investment arm, announced in a separate statement that it had made interest payments of $9 million on its $300 million bond due 11 days early in order “to avoid potential disruption due to the Lunar New Year holidays”.

In a separate announcement on Friday, HNA’s flagship Hainan Airlines Holding Co (600221.SS) told the Shanghai Stock Exchange that a major company reorganisation would involve the purchase of major aviation assets, including maintenance and flight training facilities, as well as hotels.

A deal has not been finalised, and the company said it is continuing to work with financial consultants and other intermediaries.

Hainan Airlines is one of seven mainland stocks that have been suspended from trading due to the group’s restructuring activities.