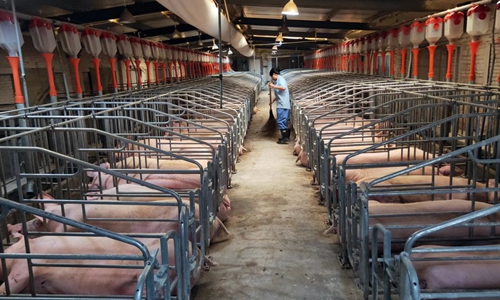 One of China's major hog breeding companies Zhengbang Group has come under spotlight recently because of a video clip went viral on Chinese social media, which showed pigs belonging to the company's breeders being starved to death due to feed shortage, even with images of some pigs eating the corpse of other dead pigs.

Zhengbang Group replied to investors queries on Monday about media's reports of feed shortage that the incident was isolates to regional areas, and will not affect the operation of the company, noting that the issues have been solved through resource coordination.

Zhengbang Group said the company had come under financial strain due to the impact of COVID-19 epidemic and pork price plunge in June, and the feed shortage was caused by lack of communication between logistics and feed factories, vowing to rectify the process using multiple measures.

At the beginning of July 2022, National Development and Reform Commission (NDRC), China's top economic planner, moved to curb surging pork prices, considering tapping into central and local pork reserves to prevent rapid price hikes, following a meeting on July 4 that stressed the crackdown on hoarding and other illegal activities behind the recent rise in pork prices.

According to the data of China's Ministry of Agricultural and Rural Affairs, China produced 365.87 million pigs in the second quarter of 2022, about 170 million more than the level in the first three months. The wholesale price for pork in June reached 21.57 yuan ($3.19) per kilogram, a slight increase over the price in May of 20.68 yuan per kilogram.