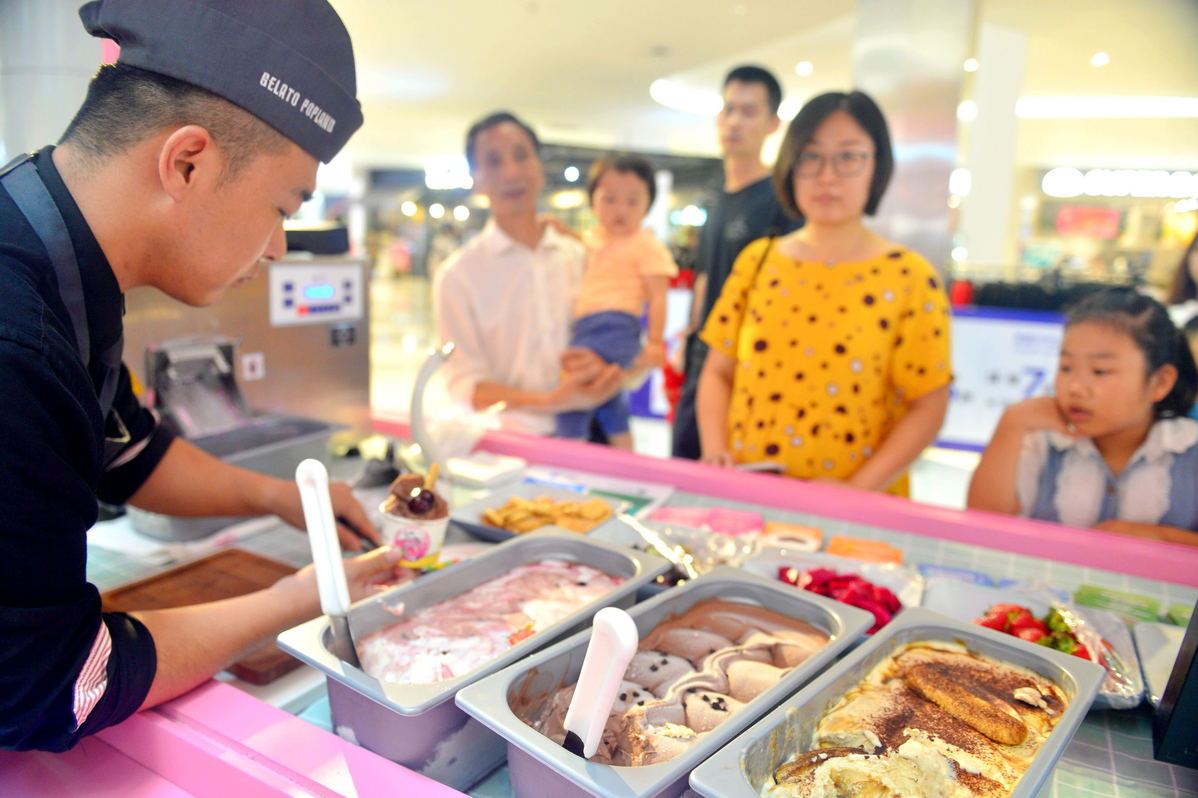 Customers line up for ice cream at a shopping mall in Tianjin. (Photo: China Daily)

TIANJIN - China's ice cream industry, like many others, has been hit hard by the COVID-19 epidemic that impeded the transportation of raw materials. The industry, however, is gaining steam quickly thanks to the effective epidemic control across the country.

Exhibitors and buyers at Ice Cream China 2020, Asia's biggest fair of the industry which closed in North China's Tianjin on Wednesday, shared their stories of recovery.

Recalling the tough times during the epidemic, Huang Ying, senior brand manager of Chicecream, a hit ice cream brand in China, said: "One of our products was out of stock for half a year before returning to the market, as one of the major ingredients, aged Irish cheese, was not available for shipping."

However, Chicecream has still performed well due to its far-sighted online marketing strategy and a mature logistics system.

"People stayed home for a long time during the epidemic and showed great enthusiasm for online consumption. To some extent, COVID-19 has brought an opportunity for our sales," Huang said.

Over 300 companies, Chicecream included, gathered at the three-day fair with an exhibition area of over 30,000 square meters as most of the major ice cream brands and machinery suppliers in the country have posted profits despite the epidemic.

"Ice cream is not only a special snack for summer but a popular and sweet choice in leisure time," said Long Xiangfei, head of the marketing department of the Tiankaile Ice Cream Co Ltd, which reported nearly 30 percent sales growth this year.

"The ice cream industry is transforming due to the epidemic. Enterprises providing high-quality products through innovation have survived and even thrived while low-end enterprises were forced out of the market," said Long of Tiankaile.

In October, an ice cream branch of Bright Dairy & Food Co Ltd, one of China's leading dairy producers, introduced into its products famous cartoon figure Monkey King, a central character in the 16th-century novel "Journey to the West." The ice cream of Monkey King consists of nine pieces, and the customers can freely combine them like playing a puzzle.

Besides, the company launched an ice cream flavor of a time-honored creamy candy brand in March, bringing 80 million yuan ($11.9 million) in sales revenue so far.

"My company has enjoyed a 30-percent growth in automated machinery sales, as many domestic buyers intend to update their equipment due to rising labor costs caused by the epidemic. The transformation towards automated manufacturing is an inevitable trend," said Sha Qingtian, general manager of the Nanjing Puyuan Ice Cream Machinery Manufacturing Company.

Zhejiang XINGX Refrigeration Co Ltd has seen over 270 percent year-on-year growth in refrigerator exports over cost advantage and R&D capability. "We have received orders for December this year," said Li Hongjie, an executive with the company.

"China is a big producer and consumer of ice cream, with annual production topping 5 million tons in recent years. The long-expected Ice Cream China, held as scheduled, has boosted the industry's confidence," said Xu Qian with the organizing committee of the fair.

"The future of the ice cream industry is very promising in China," said Xu.