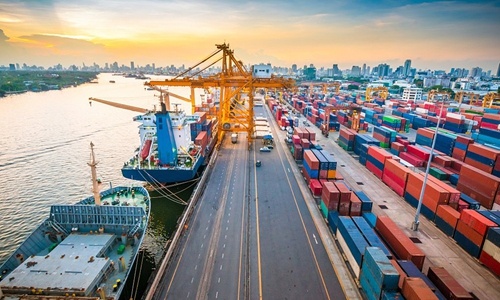 Despite the fallout of the pandemic and the complexity of the global political environment, China's industrial output above designated size rose by 6.9 percent year on year, a similar growth rate to September, with a month-on-month growth of 0.78 percent, according to the National Bureau of Statistics (NBS), reflecting the country's driving role as a world factory after successfully containing the pandemic.

From January to September, the total profits of industrial enterprises above designated size in China reached 4.36 trillion yuan ($662 billion), down 2.4 percent year-on-year and 2 percentage points narrower than from January to August, the NBS reported on Monday.

In September, the total profits of industrial enterprises above designated size increased by 10.1 percent year-on-year, while China's manufacturing purchasing managers' index stood at 51.4 in October, above the tipping point for eight months in a row.

"China's role as the world factory strengthened after the pandemic was brought under control, while production in many other countries including the US is still disrupted by the ongoing outbreak," Tian Yun, vice director of the Beijing Economic Operation Association, told the Global Times on Monday, noting that this has played a major part in contributing to the growth of China's industrial output.

"The economy expanded in October at the same pace as the previous month, helped in large part by better-than-expected exports," Tian said, noting that the US contributed the most to China's exports, with exports to the US alone driving 4 percent of China's overall exports in October, 50 percent higher than the 2 percent in 2017 and 2018.

This October also witnessed a boom in domestic consumption from the eight-day holiday in the beginning of the month, during which domestic tourism revenue reached 466.56 billion yuan, a year-on-year recovery of 69.9 percent.

The consumption rebound also pushed up the employment rate from January to October, with 10 million new jobs created in China, reaching the annual target ahead of schedule, according to the NBS report on Monday.

China's economic growth will accelerate further in the fourth quarter compared to the third quarter, said Fu Linghui, spokesperson of the NBS.

Although no details on growth rate have been released, given the positive growth in the industrial output, consumption and trade, Tian predicted that China's GDP will exceed 2 percent for the whole year.

Meanwhile, as the national economy continued to grow in October, a complete recovery still faces many challenges, with the spread of the global epidemic in Europe, the US and other economies, further slowing down world economic and trade recovery, Fu said.