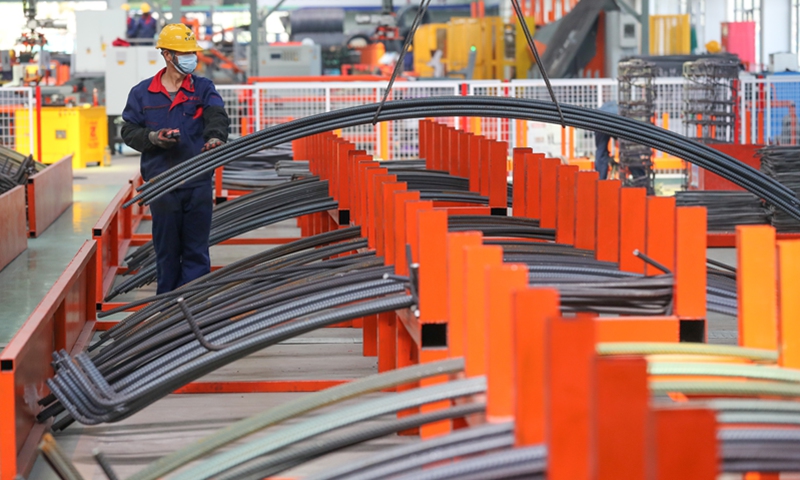 A worker works in a factory in the Deqing Green Building Industrial Park in Huzhou, East China's Zhejiang Province, on April 6, 2022. (Photo: cnsphoto)

Profits at China's industrial firms of above designated size improved significantly in May from April despite a year-on-year drop, official data showed on Monday, adding to growing signs of steady recovery in the world's second-largest economy, as recent COVID-19 outbreaks ease and the supply chaos and disrupted factory activities have been largely addressed.

Although profits of industrial firms above designated size saw a 6.5 percent annual loss in May, the decline rate is two percentage points lower than the 8.5 percent slump registered in April, according to data released by the National Bureau of Statistics (NBS).

Experts said that the improvement in industrial profits is in line with a broad improvement in economic data in May, which is expected to set China's GDP in the second quarter at a reasonable growth range.

The improved profits came as a result of improved supply chain function, and reduced operation costs and tax burdens on enterprises, Zhu Hong, a senior NBS statistician, said in a statement.

"The gradual recovery of production and industrial and supply chains in May boosted the sales of industrial enterprises and created favorable conditions for the improvement of corporate profits," Zhu said.

Notably, industrial firms based in the COVID-hit eastern and northeastern regions have seen narrowed profit declines in May as they ramped up work and production resumption.

By industries, midstream equipment manufacturer have seen their profits improve significantly from April driven by the improved logistics and accelerated work resumption in key regions, the NBS said.

The profits of basic consumer goods makers also improved thanks to the gradual recovery of market demand and consumption-boosting policy measures.

Profits in liquor and beverage sectors rose 21.1 percent year-on-year in May, while the food manufacturing industry saw an annual growth of 7.7 percent in May, according to NBS data.

Profits of coal, oil and other energy industries doubled from May 2021, after more policies to ensure energy supply were rolled out.

The recovery of industrial production as the impact of COVID-19 eased is the main reason for the improved profits of industrial enterprises in May, Wu Chaoming, chief economist at Chasing Securities, told the Global Times on Monday.

Although there have been some positive changes in the profits of industrial enterprises, the fallout of the COVID-19 epidemic continues to weigh.

It is expected that the industrial profit growth will continue improving after the epidemic in China is brought under control, and economic activities picked up at a faster rate, Zhou Maohua, a macroeconomist at Everbright Bank, told the Global Times on Monday.

China's cabinet, the State Council, launched a basket of 33 measures to stabilize economic growth recently, including extending value-added tax refunds to more industries, a move that is expected to increase tax refunds this year to a total of 1.64 trillion yuan.

"As the worst epidemic flare-ups are under control and policies to stabilize growth have been effectively implemented, the macro economy started recovering in May, with major economic indicators pointing to signs of improvement," Wu said.

"As the epidemic situation improves and policy support accelerates, the economy is expected to improve, with a GDP growth of around 1.4 percent in the second quarter," Wu said.