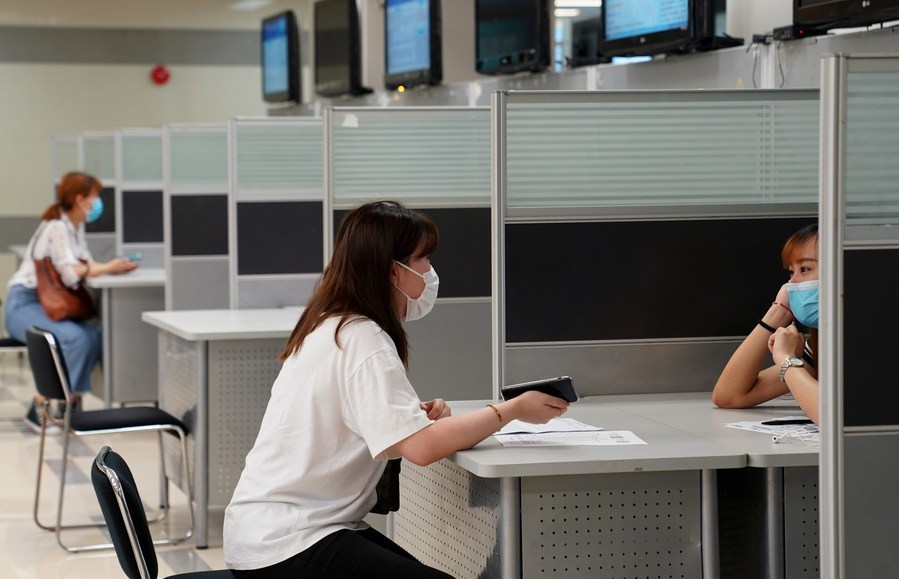 BEIJING - China's surveyed unemployment rate in urban areas stood at 5.7 percent in June, 0.2 percentage points lower than that of May, data from the National Bureau of Statistics (NBS) showed Thursday.

A total of 5.64 million new urban jobs were created in the first half of 2020, completing 62.7 percent of the annual target, said the NBS.

The surveyed unemployment rate among those aged between 25 and 59, the majority of the labor market, stood at 5.2 percent in June, down 0.2 percentage points from May.

Meanwhile, the surveyed unemployment rate in 31 major cities was 5.8 percent last month, down 0.1 percentage points from May, according to the NBS.

Liu Aihua, a spokesperson for the NBS, noted that positive changes have taken place in the job market in the first half of the year with the surveyed unemployment rate declining gradually as the country took a string of effective measures to stabilize employment and ensure people's well-being.

Liu, however, acknowledged that the pressure on employment situation cannot be overlooked this year due to the impact of COVID-19, especially for some key groups, such as migrant workers and college graduates.

Faced with higher employment pressure in urban areas, fewer rural laborers migrated to work in cities this year. The number of migrant rural laborers who had left their hometowns for work decreased 2.7 percent year on year at the end of June, the NBS data showed.

The surveyed unemployment rate among job seekers holding junior college diploma or higher degrees and aged between 20 and 24, the majority of whom are fresh college graduates, stood at 19.3 percent in June, up 3.9 percentage points from the same month of last year.

More work should be done to implement policies of cutting tax and fees and reducing social securities costs and rents for market entities in order to help them tide over difficulties and stabilize employment, Liu said.

She emphasized measures to make the market play a better role in boosting the employment of college graduates while enhancing employment assistance to rural migrant workers and encouraging new business modes and flexible employment to help them find jobs in places close to their homes.

Liu also expressed confidence in the generally stable employment situation in the second half of the year, saying the upbeat of the economy will lead to further development of enterprises and contribute to the stability and expansion of employment.