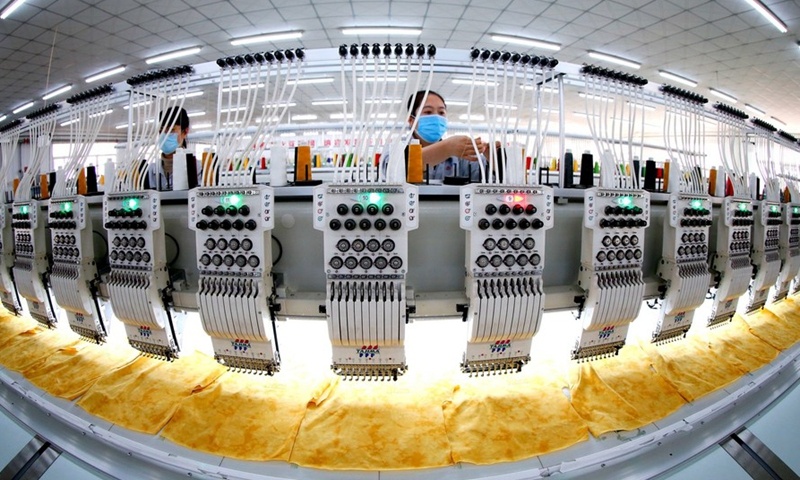 China's manufacturing purchasing managers' index (PMI) fell slightly for the third consecutive month in June due to a weak recovery in demand and tight supply of raw materials such as coal, power supply crunch, and chip shortage.

China's manufacturing purchasing managers' index (PMI) for June stood at 50.9 percent, sliding 0.1 percentage point from May, but remaining in the expansion territory, the National Bureau of Statistics said Wednesday.

The June data showed that the production index slid 0.8 percentage points from last month as the production of some enterprises were temporarily halted due to the tight supply of chips, coal and electricity. The manufacturing indexes of petroleum processing and auto manufacturing in particular stayed in negative territory, according to the NBS.

The slowing down in global demand and a volatile global supply chain have contributed to the relatively weaker PMI data, Tian Yun, former vice director of the Beijing Economic Operation Association, told the Global Times on Wednesday.

"The global supply chain is recovering and its reliance on Chinese manufacturing has decreased. The decline of external demand has eased the production," Tian said.

According to the NBS the new export order index remained at low level of 48.1 percent in June, down 0.2 percentage points from the previous month, mainly due to a sharp plunge in metal smelting and calendering orders.

The new export order index has declined for three consecutive months, and the growth rate of import and export in the second half of the year is likely to further weaken, Liu Xuezhi, a senior macroeconomic analyst at Bank of Communications, said in a note he sent to the Global Times on Wednesday.

"With the recovering of the supply chain it is expected that Chinese company may have to focus on domestic market in order to keep the growth momentum. The fiscal policy may also be shifted to boost a smooth economic cycle at home, said Tian.

According to NBS, the pressure of industrial product prices has been generally eased in the month after the country takes measures to stabilize growing volatility of commodities prices.

The average purchase price and the factory gate price for major raw materials have dropped 11.6 and 9.2 percentage points, respectively, from the previous month. The price of metal smelting and calendering has dropped significantly, falling to the contraction range, according to NBS.

"It is expected the manufacturing companies' factory gate price may continue to edge up in June to hit a peak of the year, before pulling back," Liu said.