The HBIS Group Co Ltd said it will partner with South Korea's largest steel company POSCO in setting up a joint venture in China to develop, produce and sell high-end steel products for the automobile industry, aiming to seize opportunities in the country's automobile market. 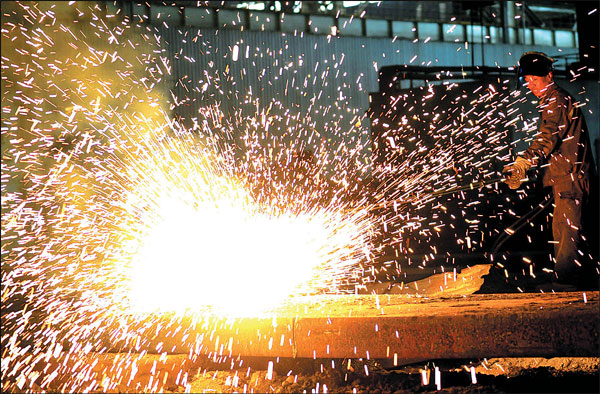 HBIS Group Co Ltd is one of China's largest steelmakers.

According to the company, location of the joint venture, which is still under discussion, is expected to be in Tangshan, North China's Hebei province, where HBIS's Laoting cold rolling steel project is located.

The two firms recently signed a memorandum of understanding for the project. The detailed investment scale of the venture was not disclosed because related matters remain under discussion, HBIS said.

Xu Xiangchun, information director and analyst with iron and steel industry consultancy mysteel.com, said the cooperation should be a win-win move for both firms.

"By cooperating with Chinese companies, overseas steelmakers can gain more share in the country's steel market, which is the largest in the world," Xu said, adding Chinese companies can cooperate with foreign steel giants on advanced technologies to improve the competitiveness of their products.

"Many joint-venture carmakers in the country are increasingly using high-end steel products made by Chinese producers, which have gained significant market share in the field," he said.

The cooperation in the auto steel project will allow the two partners to enhance their respective competitiveness and deepen their comprehensive cooperation partnership, HBIS said.

The two partners have conducted multi-level technical and commercial discussions on the auto steel project during the first half of 2019 and reached an intention to cooperate at the capital level, it said.

Under the framework of the memorandum, the two firms will leverage advantages in technology and resources to jointly explore the high-end automobile market.

The two steel giants established a comprehensive cooperation partnership in August 2017, to bolster communication and cooperation in the areas of strategic planning, raw materials, technologies, energy conservation and environmental protection.

A regular communication mechanism has been established and fruitful results have been achieved, HBIS said.

HBIS and POSCO are both leading players in the global steel industry.

As the largest steel company in South Korea, POSCO has been rated as the world's most competitive steel enterprise by industry journal World Steel Dynamic (WSD) for 10 consecutive years.

HBIS Group is one of the most internationalized steel companies in China and has become the second largest steel supplier for the automobile sector in the country. The firm is based in Shijiazhuang, the capital of Hebei province.

HBIS has done outstanding work in stepping into the overseas market, Xu said. In April 2016, the company bought a steel factory in Serbia and realized a profit in several months.

In addition, the company has also established cooperation with companies from the United States and France in some research and development projects.