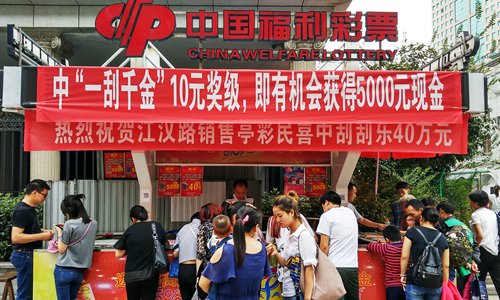 China's lottery sales reportedly fell for the first time in a decade, which industry insiders said is the result of tougher government regulation and "customers returning to rationality."

According to data released by China's Ministry of Finance (MOF) in July, lottery sales in the first six months of 2019 totaled 212.6 billion yuan ($30.3 billion), down 13.3 percent year-on-year.

It is the first decline of the lottery in China in the past decade, National Business Daily reported Monday.

Lottery sales nationwide in June fell 40.7 percent year-on-year. The sharp decline was mainly due to the large-scale sales of lottery during the World Cup in June 2018, according to the MOF.

However, industry insiders noted that tougher governmental regulation, including a ban on illegal online selling platforms and adjustments to the high-frequency lottery ticket, was part of the reason for the declining sales.

Future lottery sales in China will only be conducted at physical lottery outlets as people become more rational and government enhances regulation, Nie Lao, a lottery insider based in Chengdu, Southwest China's Sichuan Province, told the Global Times on Monday.

In August 2018, China's 12 central governmental agencies announced a ban on unauthorized online lottery sales to curb rampant irregularities such as gambling and swindling.

Nie said many platforms were closed due to "ticket eating," which means platforms intentionally did not purchase lottery tickets for buyers but kept the money themselves.

Lottery corruption further prompted the government to take action to regulate the industry, analysts said. In late 2018, the Beijing Youth Daily  reported that 14 officials of the China Welfare Lottery had been investigated and punished for corruption. But the amount of money involved has not been revealed.

The lottery industry, especially high-frequency lottery, was also used by some criminals to launder money, according to Nie.

In response, the Civil Affairs Ministry changed the time of high-frequency lottery, a fast-paced lottery launched in 2008, from 10 to 20 minutes in February this year.

The movement caused sales of high-frequency lottery tickets in Chengdu to drop by half since then, Nie said.

"Thousands of people used to gather around lottery stations on the day of the draw, hoping to become a millionaire overnight," Lu Wen, a white collar worker in Beijing said about the booming lottery industry in the early 2000s.

Lu said that the lottery is no longer as entertaining as before.