NEW YORK, May 17 (Xinhua) -- Shares of Chinese coffee startup Luckin Coffee surged about 20 percent in its US stock market debut on Friday. 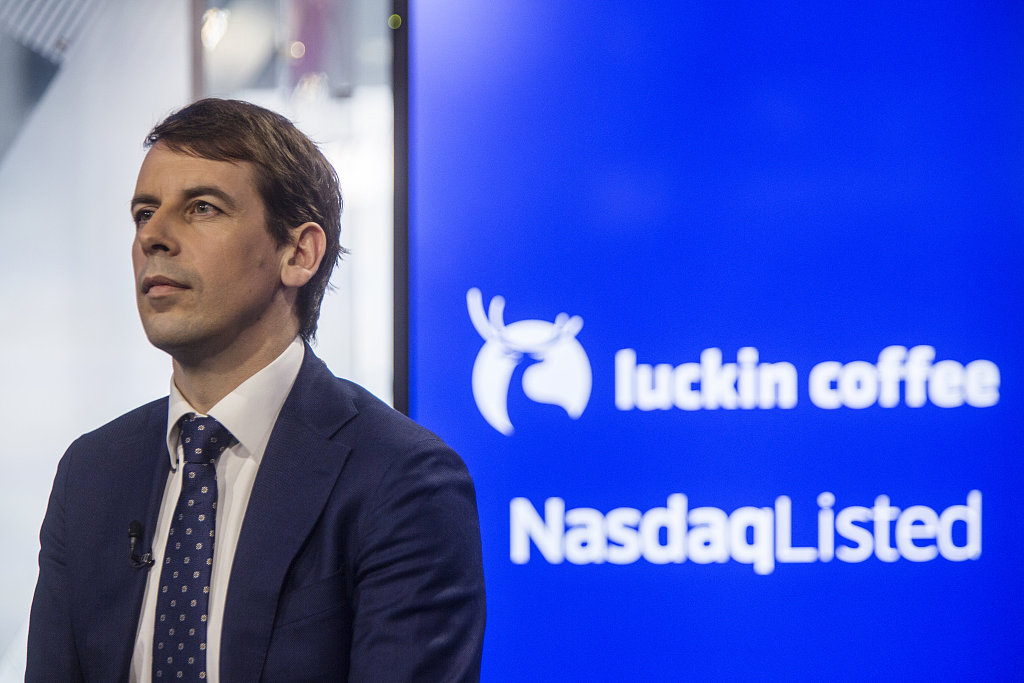 Reinout Schakel, chief financial officer of Luckin Coffee Inc., listens during a Bloomberg Television interview ahead of the company's initial public offering (IPO) at the Nasdaq MarketSite in New York, U.S., on Friday, May 17, 2019. (Photo: VCG)

Listed on the Nasdaq Global Select Market, the Chinese coffee retailer commenced trading at 25 US dollars per share after its initial public offering (IPO) was priced at 17 dollars apiece.

During the initial trading sessions, Luckin shares once surged over 47 percent at their high. Later, the whirlwind upswings gradually narrowed down to over 20 percent until the closing bell.

Before the listing, the company upsized the IPO deal by increasing its American Depositary Shares, which brought it 561 million dollars before fees.

Together with concurrent private placement to Louis Dreyfus Company B.V., Luckin has raised approximately 571 million dollars in aggregate after fees to fuel its growth.

Reinout Schakel, chief financial officer (CFO) of the company, said that they decided to enlarge the IPO deal based on broad support across several wealth funds, long-only funds and hedge funds.

"We've got very small stores. We can actually bring down the cost significantly compared to some of our competitors," said Schakel.

"What that then allows us to do is really provide a high-quality product for a very affordable price at a very convenient location," he said.

The company has placed its center of gravity on pick-up stores, and with limited seating, the pick-up stores are located in areas with high demand for coffee, such as office buildings, commercial areas and university campuses.

"We're slightly different from traditional retailers. We first look at what is the demand. And then we supplement that with our store footprint by finding the right locations by using data," said Schakel.

According to Schakel, Luckin is more focused on takeaway deals.

"People that sit in the office want to go grab a quick cup of coffee. I think that's where we have real strength of our model," the CFO noted. "It's very difficult to compete with us."

However, Luckin's generous discounts on its products have raised doubts over the company's profitability.

In response, Schakel said the company has been "very focused on" bringing down the cost of perks and would continue to capture the huge demand in the Chinese market by expanding its business going forward.

"Over time, that retention rate is continuously increasing. And you also see that the number of items per active customer is continually increasing," he said. "So that is evidence in itself that the longer people are with us, the more they start ordering with us."