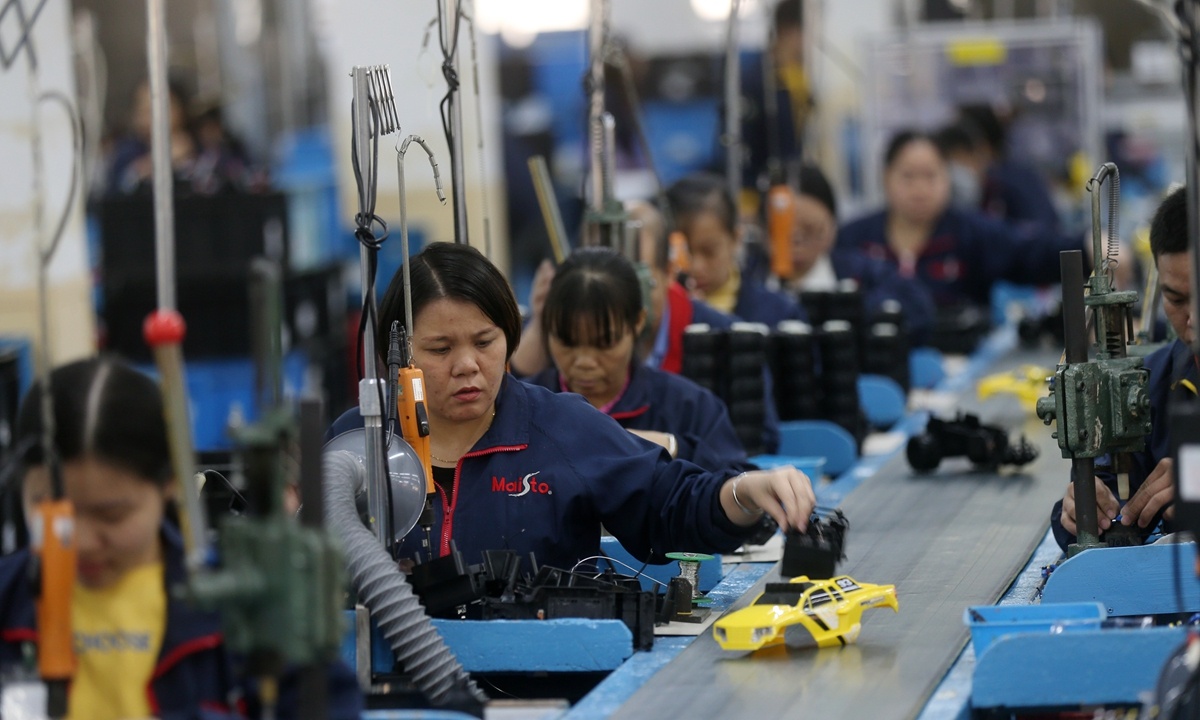 As businesses and factories in South China's Guangdong Province face challenges ranging from a resurgence of COVID-19 to rising raw material prices and logistics disruptions, concerns are growing over the potentially severe impact on China's major manufacturing and export hub, which some fear may weigh on the country's overall trade in June.

While epidemic control measures and backlogs at major ports caused some disruptions to factory operations and overseas shipments, the impact has been largely limited, and the outbreak has been reined in despite some lingering restrictions, sources at nearly a dozen businesses in various regional cities said on Thursday.

The disruptions may hurt some small and medium-sized enterprises (SMEs) and weigh on Guangdong's exports in June, but a strong rebound in factory activity and exports can be expected once the outbreak is fully controlled, trade experts said.

Central and local governments are moving swiftly to ease the impact on SMEs and exporters, including providing financial relief to businesses and dispatching more cargo ships to add shipping capacity.

"The Pearl River Delta can no longer suspend work, because it would have too much impact on the national economy," a manager at a magnet producer surnamed Tang in Dongguan, a manufacturing hub in Guangdong, told the Global Times on Thursday.

In 2020, Guangdong contributed about 11 percent of China's GDP and 22 percent of total trade, making the potential impact on the province's economic activity a cause for national concern. Given Guangdong's crucial role as a shipping hub, disruptions could also have global implications.

Though the province has largely reined in the outbreak, with only eight new cases reported for Wednesday, many areas in Guangdong are still deemed risky, and restrictions are being left in place to stem the spread of the virus.

"The epidemic has only had a limited impact in the district where we are. However, if materials are transported from some medium- and high-risk areas, there would be delays. Some workers living outside of the district may not be able to come to work every day, and nucleic acid tests for all staff could also affect some production," a manager surnamed Yin at a medical equipment maker in Guangzhou told the Global Times on Thursday.

The outbreak - coupled with limits on electricity supplies -- could result in a decline of 20-30 percent in the company's production capacity, according to Yin. Also, shortages of cargo containers and delays in shipments to the US and Europe have added to the company's costs, Yin said.

Amid a summer peak for electricity consumption fueled by humming factories and other economic activity, officials in the province last month told factories to limit electricity use. Also, as COVID-19 cases at the Yantian port in Shenzhen severely disrupted operations, other major ports across the province were also affected, leading to serious delays.

"The outbreak had no impact on our production, but it has had a very big impact on export transportation because we cannot get containers," the owner of a textile factory in Dongguan told the Global Times, adding that rising raw materials prices and limited power supplies also had "some" impact.

Given these combined challenges, some market analysis has shown that Guangdong's exports could hit their lowest level this year in June, with some predicting a 30-percent drop in Guangzhou and Shenzhen - the two major export hubs. That could lead to a decline of up to 8 percentage in the growth of China's exports in June, according to one widely circulated analysis this week.

However, such estimates may be exaggerated, given that the outbreak was largely confined to certain areas and most economic activity was not affected, businesses and experts noted.

"The outbreak has some impact, but it's definitely not as bad as some suggested," Hong Shibin, deputy executive director of the marketing committee of the China Household Electrical Appliances Association, told the Global Times. Epidemic control measures were precisely targeted and most businesses were not affected. "Our factory has been operating normally and receiving orders normally due to the precise prevention and control measures."

In a direct sign that things are getting back to normal, the port at Yantian -- which was partially shut down -- resumed "full operations" on Thursday, with daily throughput reaching 330,000 standard containers, port officials said.

To ease the shortages of containers and ships, China has dispatched "all" operable ships, except those are undergoing maintenance, and significantly increased the monthly output of standard containers, Vice Minister of Transport Zhao Chongjiu told a press conference on Thursday.

Bai Ming, an expert at the Chinese Academy of International Trade and Economic Cooperation, said that various measures are in place to stabilize Guangdong's exports and once the outbreak is contained, Guangdong will see a strong rebound in exports.

"There is no cause for worry, because we are well-prepared to deal with the outbreak and other challenges. If there is an impact on Guangdong's exports, it will be transitory," Bai told the Global Times on Thursday.