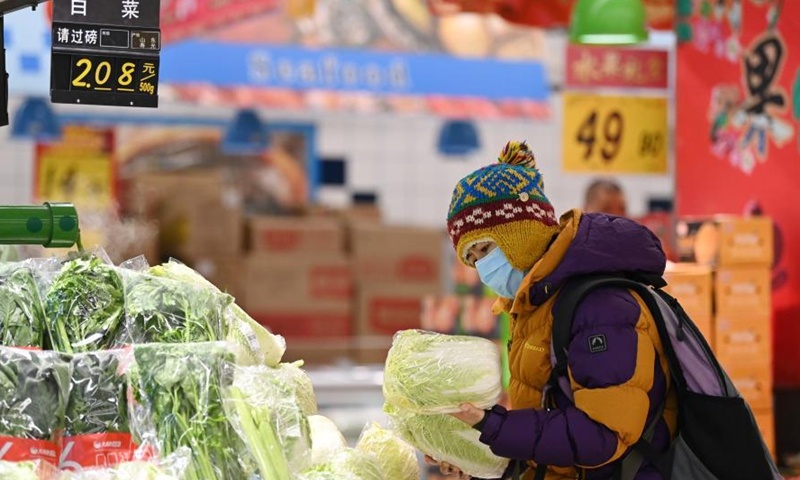 A resident selects vegetables at a supermarket in Xiangfang District of Harbin, northeast China's Heilongjiang Province, Jan. 30, 2021. Price and supply of daily necessities are stable in Harbin amid the ongoing COVID-19 pandemic, local authorities told a press briefing here on Saturday. (Photo: Xinhua)

The regulator imposed the "maximum fine" of 1.5 million yuan ($230,000) each on four companies: Didi-owned Chengxin Youxuan, Duo Duo Maicai under Pinduoduo, Meituan Select, and Nicetuan, which is backed by Alibaba.

Wuhan-based Shixianghui, which counts Tencent among its investors, was slapped with a fine of 500,000 yuan.

Responding to the penalty, Duo Duo Maicai told the Global Times on Wednesday the company attached great importance to the case and will rectify relevant problems actively in line with the requirements of the regulatory body.

Selling groceries online with big discounts, these community group-buying companies have gone viral with young urbanities who seldom go shopping at the groceries or supermarkets.

According to an explanation by the SAMR on Wednesday, the companies used unfair means to squeeze groceries. By utilizing their financial and data advantage, the platforms upset the market by offering below-cost prices, which threatened survival of groceries.

By competing for market share with unreasonably low prices, these platforms can achieve explosive growth. There is a tendency for big online platforms to "spend huge amounts of money to grab market share through monopoly." Such unfair competition is to hurt the legal rights and interests of vast consumers, according to the regulator.

The five platforms, backed by Chinese online giants such as Alibaba, Tencent and Meituan, may allow the "business titans to grow even bigger" while endanger others' survival, analysts said.

Unethical practices by the titans are especially rife, because these companies tend to seek a "network effect" by leveraging their dominance on the market, Tian Yun, vice director of the Beijing Economic Operation Association, told the Global Times on Wednesday.

"Earlier, these giants decimated many small businesses in traditional sectors with their deep pockets," Tian said. "Without intervention from market regulators, there is no chance of survival for small businesses, and free market competition will be destroyed, leaving consumers vulnerable to monopoly."

According to the SAMR, improper price practices by the giants seriously disrupt market order, because it is normal to see price gouging acts by the platforms. Some platforms draw consumers by manipulating prices.

Due to their negative impact on competition and flagrant violation of laws, the top market regulator made the decision to impose tough penalties of 6.5 million yuan in total on the five companies.

Starting from mid-December last year, the SAMR started to investigate these platforms, anticipating that tough penalties on them would deter other latecomers.

"The monopoly in the fresh produce market is especially harmful, because it has a close bearing to people's livelihood. That is why the punishment is tougher than expected," Chen Danzhou, a deputy professor specialized in market regulation and monopoly practices at the Beijing Institute of Technology, told the Global Times.

According to Chen, the practices used by the five companies, including price gouging and offering large discounts, are prohibited by China's anti-monopoly law. The companies were penalized under the price laws instead of those covering monopoly practices, because they have yet to reach the market size of a monopoly.

China faces inadequate regulation when it comes to platform economy, and many of their practices that infringe on free competition are hard to define and regulate under current laws, Chen added.

"China's Price Law was last updated in 1997 and can be outdated when used to regulate new internet companies," Chen noted.

"Newer laws, such as the Anti-unfair Competition Law and the Anti-monopoly Law, are also unable to properly define and confine the behavior of internet companies."

China has been strengthening supervision over its online tech giants, which contribute greatly to the country's booming emerging economy and enjoy high global rankings in the technology sector. However, some of those giants have established a dominant position that would disturb the normal market order and harm consumers' rights.

Some said that it's high time for China's regulators to push for legal updates to better accommodate the new online economy. In early February, the SAMR released the latest guidelines for regulating the new economy entities.