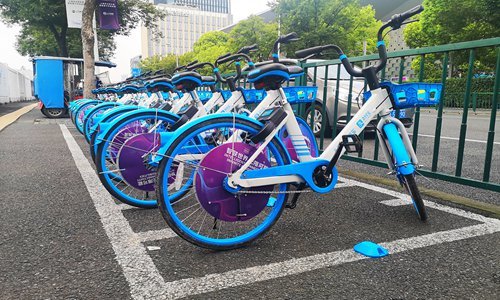 A row of shared bikes are parked in front of the Shanghai World Expo Exhibition Center in 2019. (File Photo: VCG)

China's State Administration for Market Regulation (SAMR) has required eight companies based on the sharing economy to enhance their compliance of norms and standardize pricing and competition practices on Thursday.

The price supervision anti-monopoly bureaus of the SAMR held an counselling conference with companies with businesses in the sharing economy, including Alibaba-backed bike-sharing platform Hellobike, car-hailing giant Didi Chuxing's bike-sharing arm Qingju, Meituan, and power bank rental companies such as Xiaodian and Jiedian, according to a notice by the market regulator published online on Thursday.

At present, there are many improper practices in the sharing economy industry such as unclear pricing rules without standards. Therefore, enterprises are required to enhance their compliance and standardize pricing and competition practices, according to officials.

In 2020, China's sharing economy reached about 3.38 trillion yuan ($527.7 billion) in transactions, with a year-on-year growth of about 2.9 percent, according to the China Sharing Economy Development Report released by the State Information Center (SIC) in February.

Complaints about price hiking in the sharing economy industry have emerged starting this year. For example, the price of a shared bike ride has risen from 0.5 yuan ($0.008) per hour to up to 3 yuan. On the same line, a shared power bank that used to be free is now charging 4 yuan per hour, while a similar power bank can be purchased for nearly 30 yuan on e-commerce platforms.

The result of the rise on prices can be seen on the revenue and profit of companies. For instance, according to the IPO filing in the US market, power bank sharing startup, Guaishou Chongdian, generated 2.809 billion yuan in revenue in 2020, a year-on-year increase of 38.9 percent from 2.02 billion yuan in 2019, of which 96.5 percent came from leasing services.

Analysts said that the market in the sharing economy has changed and now is being dominated by a few players, most of whom have followed the path of losing revenue to seize the market and take out competitors to later hike prices to make huge profit.

"Enterprises in the industry must act in accordance with the provisions of the Pricing Law and follow the principles of fairness, justice, legality, honesty and credibility, and establish a good market price order. In accordance with the provisions of the Anti-Monopoly Law, companies shall establish a sound long-term mechanism for fair participation in market competition. Companies should strictly implement corporate principal responsibility, improve internal governance rules, make pricing rules more open and transparent, and willingly accept public oversight," read the notice.

According to the requirements of SAMR, sharing enterprises should make rectifications according to relevant laws and regulations and submit rectification reports within 30 days after receiving administrative instructions.

The conference affirmed the positive role of the sharing economy and consumption in meeting the emergency needs of consumers, promoting the recovery of domestic consumption and providing public services with certain universal benefits.

In 2020, the growth rate of the sharing economy dropped significantly due to the impact of the pandemic. Considering the possible strong macro-economic recovery, it is expected that the growth rate will pick up significantly in 2021 to reach 10 to 15 percent. China's sharing economy is expected to grow at an average annual rate of more than 10 percent in the next five years, according to the SIC report.