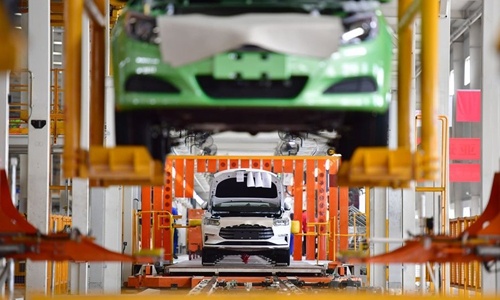 Sales of new-energy vehicles (NEV) in China surged 104.5 percent year-on-year to reach 160,000 units in October, while sales of all types of automobiles stood at 2.573 million in the month, a year-on-year increase of 12.5 percent, said the Association of Automobile Manufacturers (CAAM) on Tuesday.

According to the new development plan released early November, China will boost new-energy vehicle sector in next 15 years, and plans to raise the share of NEVs to 20 percent of total auto sales by 2025.

China "will make breakthroughs in core technologies, improve conditions for industrial development, promote high-quality and sustainable development for the NEV sector, and accelerate building of the auto manufacturing power," said the development plan, which is part of the 14th Five-Year Plan (2021-25) outline issued by the Fifth Plenum of the Communist Party of China (CPC) Central Committee.

In view of the huge potential of China's NEV market, overseas automakers are also raising their investment. For example, Tesla is building its phase II Gigafactory in Shanghai. Though Tesla has not revealed the exact number of cars to be produced for 2021, it said the building of the new factory is "progressing well."

The NEV sector is an integral part of China's long-term development plan. It is possible that the government will release new policies to support the development of NEVs such as favorable tax policies, experts said.