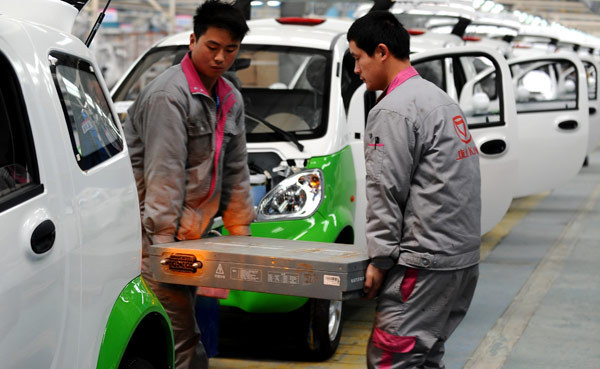 Workers carry an electric car battery at the production line of an e-carmaker in Zhejiang province. [Photo provided to China Daily]

The output stood at 5.2 gigawatt-hours last month, and the sector's total output in the first five months of the year plummeted 50.9 percent to 18.2 gigawatt-hours, according to the China Automotive Battery Innovation Alliance.

In May, the installed capacity of the batteries came in at 3.5 gigawatt-hours, dropping 2.3 percent month-on-month and declined 38.3 percent from the same period last year, showed the data.

A total of 42 storage battery companies in the NEV market reported their batteries installed last month, one company more than April.

Sales of NEVs came in at 289,000 in the first five months, down 38.7 percent year-on-year, according to the China Association of Automobile Manufacturers.