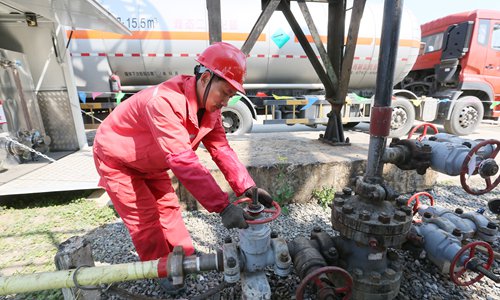 Chinese oil magnates weighed in on the trade war between China and the US by vowing to ensure stable oil and gasoline production, contain the outcome of possible suspension of vital services provided by foreign companies and boost control over financial risks. The announcement brought attention to China's oil sector and the nation's alarmingly high reliance on imported oil - about 70 percent of total use in recent years - which can affect sectors ranging from technology to energy.Originally an oil-poor country, the story of how China achieved self-sufficiency in oil before reform and opening-up has made the oil industry a symbol of economic independence. Some market participants compared the self-sufficient level of the oil sector to that of chips and rare-earth elements, the foremost media topics in the past month as the trade war with the US escalated. On Thursday, 24 oil-sector stocks in China rose by an average of 3.89 percent while the benchmark Shanghai Composite Index edged down 0.31 percent.State-owned oil major China National Petroleum Corp (CNPC) held a high-level meeting on coping with China-US trade friction on Wednesday. Chairman Wang Yilin urged company management to prepare for the long term and make shrewd judgment and preparations to ensure the normal operations and sound development of the company, according to a news release on the company website.The CNPC top meeting coincided with a comment made by Fu Chengyu, former chairman of state-owned oil major Sinopec, who said China should prepare for possible short-term termination of crude oil supplies.Sinopec is different from CNPC because of its refining business.Fu also said China should set up an agenda to basically achieve energy self-sufficiency in 10 to 15 years, domestic news site jiemian.com reported on Wednesday.Fu said China should aim to meet more than 80 percent of its energy demand with its own supplies.Lin Boqiang, director of the China Center for Energy Economics Research at Xiamen University, said that oil is an old industry and China has mastered all the necessary technologies and has alternatives to serve the basic needs of the nation."There are also weak links, such as some of the advanced equipment used in extraction and refining that China can't make at present," Lin told the Global Times on Thursday.Another issue is how to successfully transport Middle East oil to China in  case of a US-inflicted intervention or regional conflict, Lin said. The US has recently escalated the trade war into the sphere of technology by imposing a ban on Huawei, a Shenzhen-based global leader in wireless technologies, suspending supply of vital products and technologies to the company. US-based software providers and international standards organizations have become involved. "The calls (regarding energy) are absolutely correct but are actually not new. However, current events remind China of the sheer need to improve its energy security," noted Lin. CNPC's Wang said special efforts must be made for preventing any disruption in the event that access to key products and services is cut off by foreign suppliers and the company must improve financial risk control. He commented after hearing a briefing on the development of China-US trade friction, China-US oil and gas cooperation and the impact of the trade friction.Wang called for speeding up substitution efforts using domestic alternatives but at the same time vowed to continue to engage in oil and gas cooperation with foreign partners to achieve win-win results. Fu also emphasized international cooperation.The US does offer China a lesson in staging an energy transformation to establish full self-sufficiency, and long-term planning and efforts are sorely needed in China to do this, Lin said.