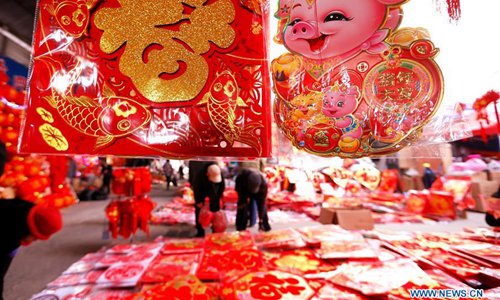 Photo: Xinhua
As of late Monday, "red envelopes" worth 3.5 billion yuan was transacted through social media payment systems, according to Chinese media reports.
Sending "red envelops" stuffed with money through online payment tools to relatives, co-workers and friends has become a new defining item for billions of Chinese during the Spring Festival.
The record occurred three seconds past midnight - the New Year's Eve leading up to the Year of Pig, Nets Union Clearing Corporation (NUCC) said, according to a report by chinanews.com on Tuesday.
The NUCC was founded by 45 shareholders, including 38 payment institutions, to ensure  effective regulation and transaction security. The People's Bank of China, the country's central bank, is the largest shareholder.
Compared with the previous years' red envelop activities, this year has seen new entrants in addition to Alipay and WeChat Pay, the top two online transfer and payment tools in China in terms of market share.
Baidu, Sina Weibo and Douyin have joined the league of sending digital red envelops. Baidu allocated digital red envelops worth 900 million yuan ($133.5 million) and realized 20.8 billion transactions on its app during the CCTV Spring Festival Gala in the lead-up to the Year of the Pig.
Last year, Alibaba-backed Taobao.com tied up with the CCTV Spring Festival Gala, sending a total of 600 million yuan in digital red envelops and prizes.
"Supporting the huge amount of transactions is China's mature digital payment standard," said Wang Pengbo, a finance industry analyst at Analysys.
Wang told the Global Times on Tuesday that as the cost of attracting new online users has risen, internet firms are seizing the opportunity to direct  the flow and promote their products through the New Year gala.
Cover illustration: VCG