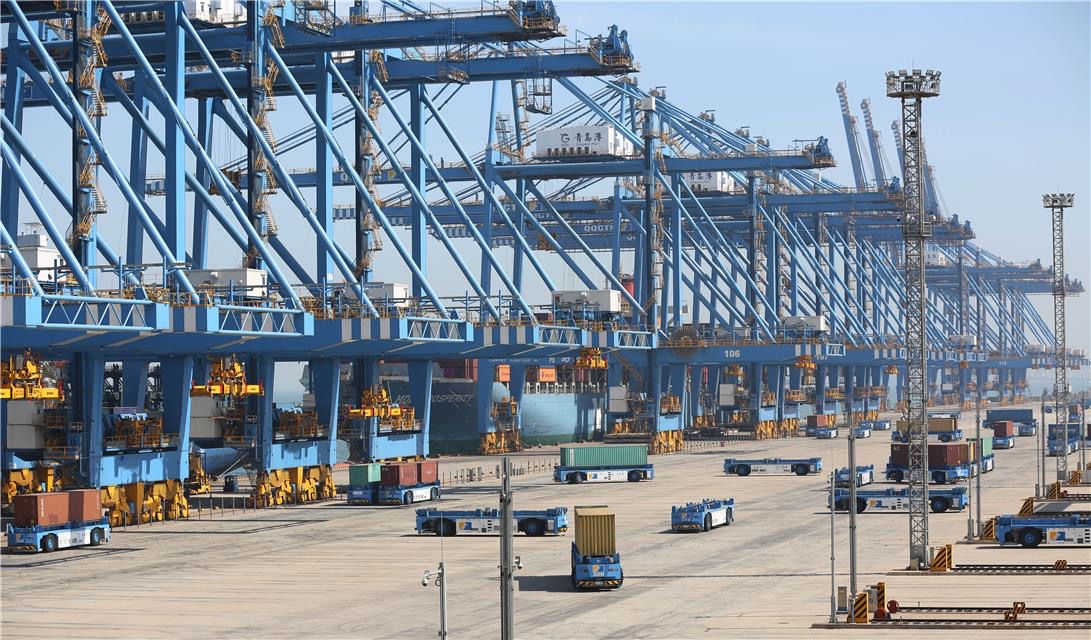 A fully-automated terminal at Qingdao Port is busy dealing with containers on April 5, 2020. (Photo by Zhang Jingang/chinadaily.com.cn)

Major ports in coastal areas of China have restored their operations to roughly the pre-COVID-19 level, which will help sustain the global supply chain that has been hit hard by the pandemic, experts said.

While doing their part to contain the spread of the novel coronavirus in China, the nation's enterprises are making equal efforts to resume their business and operations. China's coastal harbors are becoming busy again with giant vessels flowing through, heavy cranes being operated and container trucks shuttling back and forth.

"Ports in China, the world's manufacturing center, are key to the global supply chain. The smooth operation and delivery of resources and materials is a matter of life and death during a global pandemic," said Zhou Dequan, director of the Shanghai International Shipping Institute's domestic shipping research office.

Bai Ming, a senior research fellow at the Chinese Academy of International Trade and Economic Cooperation, said the integrity of the global supply chain has been damaged by the COVID-19 outbreak in overseas markets, and it is critical for China to supply anti-epidemic medical materials to the world and help other countries resume production and combat the virus.

After the outbreak of the epidemic, Shanghai International Port Group has attached equal importance to containing COVID-19 as it does to maintaining the smooth flow of shipments.

Currently, its daily operating capacity has returned to more than 90 percent of its normal level.

SIPG has been ranked as the world's busiest container port in terms of container throughput for 10 consecutive years. In 2019, it handled 43.3 million TEUs (twenty-foot equivalent units) of containers, reporting a net profit of 9 billion yuan ($1.27 billion), according to the company.

Zhejiang province's Ningbo Zhoushan Port, the world's largest port by throughput volume for 11 years in row, has restored most of its handling capacity. In March, it handled 2.28 million TEUs, only 2.5 percent less than a year ago, and 62.66 million tons of cargo in total, 9.2 percent less year-on-year, according to a public notice released by the port.

Mao Jianhong, chairman of Ningbo Zhoushan Port Group, has a deep understanding of the importance of the port to the national economy and the global supply chain.

"Ports serve as the barometer of a nation's economy, and it is crucial in the restoration of business, maintenance of the global industrial chain and the stability of supply chain," Mao said.

According to Zhou, all Chinese ports continued their services even during the most severe part of the contagion, although their performance was impaired by the interruption of the road distribution system, which led to a stockpiling of cargo at docks.

Because of stagnant logistics, falling demand and poor road transportation conditions, the amount of empty containers once reached 450,000 TEUs at the ports of SIPG, beyond the company's capacity of 390,000 TEUs. Through optimizing its resources, expanding its storage space, and leasing extra space from industrial counterparts, SIPG managed to increase its stockpile capacity by 200,000 TEUs.

Considering the importance of ocean shipping, which accounts for up to 90 percent of global cargo transportation, Zhou said China's resilient transportation through its ports will effectively underpin the recovery of the global supply chain after the COVID-19 outbreak.

"As we are shifting focus to resuming production in China and to supporting the entire global community fighting the virus, China's ports will continue to shoulder critical responsibilities on a much larger global stage," said Han at APM Terminals.