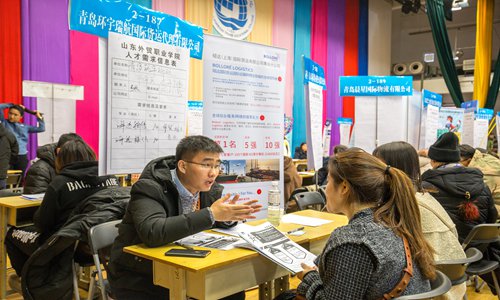 China's job market is expected to remain under pressure during Q2 2020, as the novel coronavirus (COVID-19) pandemic continues to shake the global economy, a market report revealed on Thursday, painting an even glimmer picture for the country's efforts to reduce rising unemployment.

The China Institute for Employment Research (CIER) Index during Q2 2020 will be higher than the first quarter, indicating a more competitive job market, according to the joint report from CIER at Renmin University of China and job platform Zhaopin.com.

In the first quarter, the CIER Index hit 1.43, as job vacancies dropped 22.61 percent from the same period last year, while the number of job applicants dropped 9.38.

The CIER index, a gauge for China's labor market, tracks the relationship between supply and demand. When the index surpasses 1, it means job supply has outweighed demand, while a high CIER index reflects a competitive job market.

As the pandemic outlook remains pessimistic overseas, it will continue to pull on the global economy and hurt China's job market, the report said. "Therefore, in the second quarter of 2020, the employment still faces very big uncertainty and the prospect of jobs could be worse than the prediction."

Job prospects could be grim for fresh college graduates as more will submit employment applications in the face of declining job availability. During Q1, job applications from fresh graduates jumped nearly 70 percent, while job vacancies fell by about 17 percent, the CIER report said.

In 2020, a record number of 8.74 million college graduates are expected to enter the job market, according to official data from the Ministry of Education.