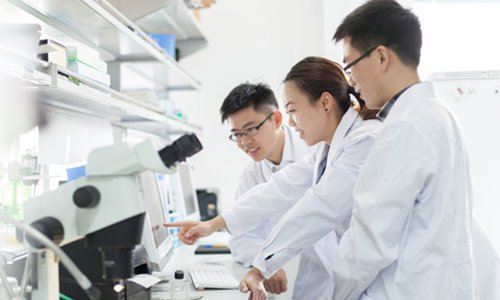 China's investment into research and development (R&D) reached 1.97 trillion yuan ($275 billion) in 2018, which Chinese experts said demonstrates the country's improved competitiveness in science and research amid the shift from importing technologies to independent innovation.

China's investment in R&D in 2018 increased 11.8 percent year on year and was the third double-digit growth in three continuous years, the People's Daily reported on Saturday, citing a National Bureau of Statistics report.

The input accounted for 2.19 percent of China's 2018 GDP and surpassed 2.13 percent achieved by 15 European countries in 2017, according to the People's Daily.

Chinese experts said the growth reflects the improvement of China's science and technology and shows China is transforming from import and imitation to independent innovation.

Growth comes along with an international trend of scientific and technological revolution, said Ju Jinwen, a research fellow at the Chinese Academy of Social Sciences' Institute of Economics in Beijing.

As China restructures its industry and remains in urgent need of high-quality development, innovation has become a major force to drive economic development, Ju told the Global Times on Sunday.

In 2018, China's investment in basic research exceeded 100 billion yuan for the first time, according to the bureau report.

Increasing investment in basic research, or pure research, can improve the original innovation capability, as proven by the development experience of many countries, Fang Zhulan, a professor of Renmin University of China's School of Economics, told the People's Daily.

Chinese enterprises have become the major driving force for growing input in innovation, whose average percentage of investment in research, researchers and patents exceeded 75 percent, according to the national newspaper report.

Since 2018, China's technical giants including Alibaba, Tencent and Huawei have all established  research institutions, hoping to cement their position in fundamental research, the paper reported in May.

China's input in R&D has reportedly ranked second in the world after the US since 2013.

Meanwhile, there is still space for China in the fields of R&D such as increasing governmental financial support and establishing a complete incentive policy system, bureau statistician Li Yin  told the paper.