BUSINESS China's rare-earth stocks surge; seen as weapon against US

China's rare-earth stocks surge; seen as weapon against US 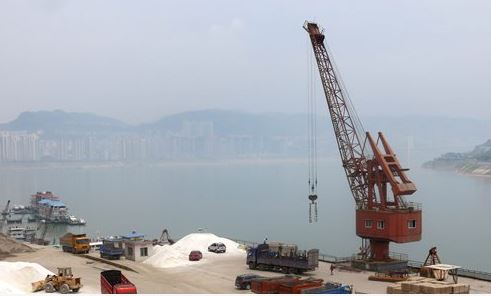 Rare earths are unloaded at a port in Southwest China's Chongqing on May 9, 2019. (Photo: IC)

Shares of China's rare-earth-related companies rallied on Wednesday as brokers and investors scrambled for the sector, after China hinted that it may use the minerals as powerful weapons against the US amid an escalating trade war between the world's two largest economies. Shares of Hong Kong-listed China Rare Earth Holdings soared by more than 30 percent in morning trading and closed with a 23.53 percent gain.JL MAG Rare-Earth Co, a high-tech rare earths company based in East China's Jiangxi Province, which was visited by Chinese President Xi Jinping on May 20, rose by the daily 10-percent limit to a record high on Wednesday, to 49.34 yuan ($7.14). China Northern Rare Earth Group rose by 8.68 percent at 13.52 yuan.A Chinese official indicated on Tuesday night that China may weaponize rare earths as a countermeasure to the US. When asked about whether rare earths will become China's countermeasures against the US, a spokesperson of the National Development and Reform Commission (NDRC), China's top economic planner, said: "What I can tell you is that if anyone wants to use products made of China's rare-earth exports to contain China's development, the people of Ganzhou [in Jiangxi] and across China will not be happy with that."The comment was viewed by many as a signal that China might use its rare earths as a weapon to contain the US as trade tensions between the two countries intensify.The exposure also attracted much capital into the formerly low-profile industry. "Funds are coming in ... rare earths are getting attention that they've never had in the past eight years," a manager of a large-scale rare earths metal producer, who spoke on condition of anonymity, told the Global Times on Wednesday."I've had very good business recently. Brokers, investment banks and suppliers all come to us," the manager said. He took two customer calls in just 20 minutes.On May 21, shares of Hong Kong-listed China Rare Earth Holdings rose 108 percent to the highest point in more than three years, according to media reports.The People's Daily published an editorial on Wednesday, emphasizing that the US shouldn't "underestimate China's ability to fight the trade war." The statement was deemed by analysts as a clear-cut warning that China's rare earths will be used as a weapon.Rare earths are non-renewable resources, including a total of 17 elements, usually divided into light rare earths and heavy rare earths, the latter being more valuable. Rare-earth elements have excellent physical properties such as light electromagnetic signals, the NDRC official said.In December 2017, US President Donald Trump signed an executive order to reduce the country's dependence on external sources of critical minerals, including rare earths, which was aimed at reducing US vulnerability to supply disruptions, according to a Bloomberg report.