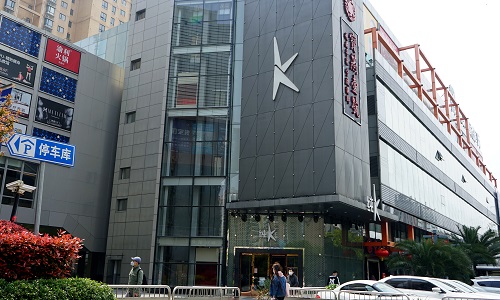 A KTV located in Shanghai's Changning district closes operation during the weekend, after a brief resumption, according to an owner of a neighboring shop. (Photo: Global Times)

An official from the cultural bureau of Shanghai's Minhang district confirmed with Global Times on Wednesday that the Shanghai's steering group of COVID-19 control and prevention issued a notice, on Tuesday, ordering the closure of some recreational venues, which had already resumed operation, in a bid to contain COVID-19 spread.

The business suspension came earlier in Shanghai than the notice. Statements issued by three industry associations from Huangpu, Minhang, and Baoshan districts, respectively, on Sunday and Monday, started circulating online, claiming that some business owners received verbal orders on March 28 via phone calls from local cultural authorities, instructing them to reclose the businesses.

The Minhang official explained, the district enforced the regulation in accordance with the mandate of the national and municipal cultural authorities. "It is to further contain COVID-19 and prevent the pandemic from rebounding," he said.

However, one of the statements, issued by a cultural association in Huangpu district, urged authorities to reconsider the decision. It appealed the authority to consider the survival of the recreational businesses and requested the city's cultural bureau to compensate business owners so they can pay staff wages and rent.

"It is irresponsible to ask us to close shortly after we resume business," Chen Kefeng, a representative of the association confirmed the statement to the Global Times, on Wednesday, adding that 60-70 percent of the member business owners, about 70 of them, had resumed business starting from March 18.

Global Times visited a Shanghai outlet of Wanyoo eSports, an internet café chain in China, where a staff member confirmed, as of Wednesday, all the outlets of Wanyoo eSports across Shanghai have been closed again after receiving a notice from the cultural authority. The new date of their business recommencement remains uncertain.

An employee from the Shanghai headquarter of Holiday KTV, a karaoke chain in China, who is eagerly waiting to resume business, also told the Global Times on Wednesday their branches in Shanghai could function for only about a week, before being instructed to close.

Many other Chinese cities, including Hefei of Anhui, Chengdu of Southwest China's Sichuan Province, and Shenyang of Northeast China's Liaoning Province are also closing recreational business, shortly after reopening, according to reports.

China's Ministry of Culture and Tourism issued a notice on March 28 to suspend the recreational venues, which had resumed operation, including KTVs, internet café, and cinemas, in a bid to contain coronavirus spread, reports said. China Film Administration also requested, on March 27, all cinemas to refrain from resuming operations, and those that restarted business to suspend operations immediately

The recreational industry is going through a difficult time because of the closure amid the coronavirus outbreak.

Chen said the business owners have to pay regular high rents, salaries, and social insurance for their staff, which have cast uncertainty on the future of their businesses. The venues they rent are also private. "The landlords won't exempt rents for us," he added.

"We can only hold out for two months at most. We are doomed if we are not able to open for business," Chen said, though he acknowledged it is still very important to stick to the epidemic control measure to curb coronavirus spread.

As of Tuesday, two-thirds of Wanyoo eSports outlets across the country remain closed due to the coronavirus pandemic, another Wanyoo employee told the Global Times Wednesday.

"We hope to be able to resume work as soon as possible. The economic loss was huge. We have nearly 1,000 outlets around the country and the daily losses are over 5 million yuan ($710,000) because of the shutdown."