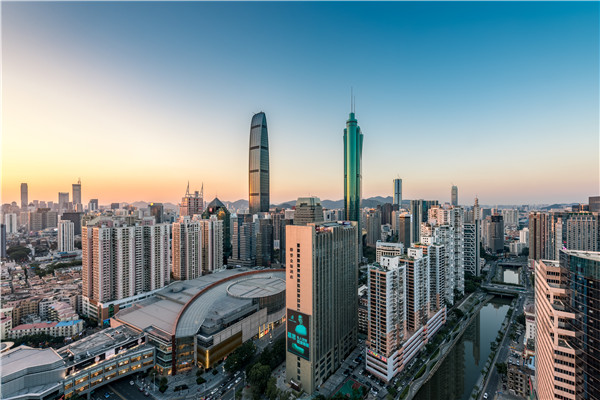 Luohu district in Shenzhen, which used to be a poor village, is now a flourishing residential area with modern apartment buildings. LUO HAIMING/FOR CHINA DAILY

TOKYO - China's reform and opening-up policy has been benefiting not only China itself, but also the world, said Goro Takahashi, professor and director of the International Center for Chinese Studies at Japan's Aichi University.

In Takahashi's opinion, there is no doubt that the achievements made by China's reform and opening-up policy are a miracle in human history.

"Between 1978 and 2017, China's gross domestic product has risen 225 times and per capita GDP (was) up by 155 times. No other country has achieved that much in such a short period of time," said Takahashi.

Now China is the world's second-largest economy following the United States, and its stable development is continuing, he said.

Takahashi summarized the achievements of China's reform and opening-up in the past 40 years under the following three aspects.

Thirdly, in terms of international relations, China is contributing greatly to free trade through promoting the internationalization of the RMB, involvement in the International Monetary Fund reform, and free trade agreements with the Association of Southeast Asian Nations (ASEAN), South Korea, Switzerland etc.

China is also playing a leading role in promoting the Regional Comprehensive Economic Partnership (RCEP) and China-Japan-South Korea Free Trade Agreement and contributing to promoting peace and stability on the Korean Peninsula.

Over the 40 years since China's reform and opening-up, 700 million Chinese people have been lifted out of poverty. China is also one of the first countries that have reached the United Nations Millennium Development Goals.

Takahashi said China's effective poverty reduction policies -- in particular, the government's macro control for remedying excessive marketism, efforts led by local governments to help poor households to make a living and the urbanization of rural areas -- could serve as a model for countries with similar conditions as China 40 years ago.

Meanwhile, China's stable development and its expanding overseas direct investment have been providing great trade opportunities to other countries.

"The policies that will make China more open are being welcomed by the whole world," said Takahashi.